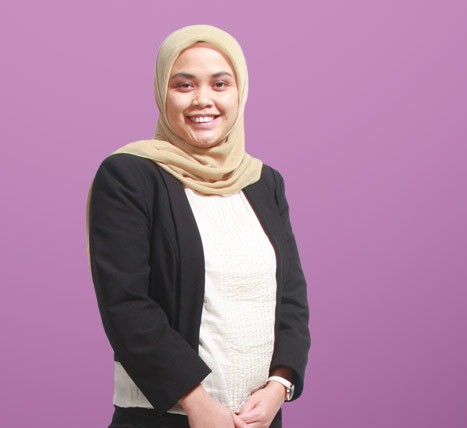 She completed her undergraduate degree at Department of International Relations University of Indonesia in 2008. During her study, she spent a year long exchange student programme in Hiroshima University as part of HUSA (Hiroshima University Study Abroad), receiving a full scholarship from JASSO (Japan Student Services Organisation) in 2006-2007.

In 2010, she earned her Master of Science in International Politics from University of Glasgow, Scotland UK, with scholarship from Chevening/Open Society Institute which also funded her summer course at Bilgi University, Istanbul Turkey as part of pre-departure orientation programme.

Prior to joining Bina Nusantara University in the late December 2011, she was adjunct lecturer at Department of International Relations University of Indonesia and Paramadina Graduate School of Diplomacy Jakarta.

Her interest in research was started early when she was appointed research assistant at Centre for East Asian Cooperation Studies (CEACoS) during her undergraduate years at University of Indonesia.

She is a Research Fellow at Institute of Global Justice (IGI) having collaborated in a research project on “Adoption and Ratification of International Trade and Investment Treaties into Indonesian Law” in early 2012. In 2011, she was involved as a member of research project on “The Implication of World Health Organization Framework Convention on Tobacco Control (FCTC) on Indonesia’s Tobacco Policy and Industry” with Indonesia Berdikari.