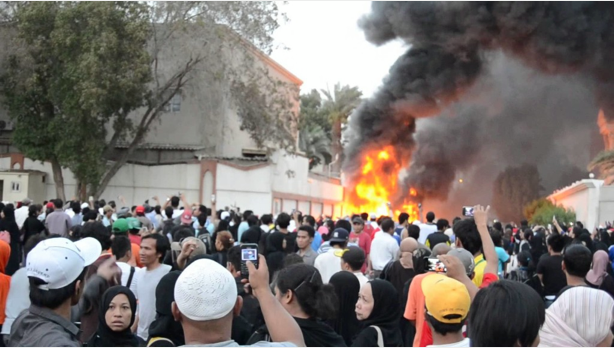 After failing to handle hundreds and thousands of applicants, the Indonesian Consulate in Jeddah, Saudi Arabia became a target of public anger.

Although it’s true, quoting Manpower and Transmigration Minister Muhaimin Iskandar, that the consulate being burnt down was an exaggeration, the chaos at the consulate revealed Indonesian workers’ frustration during the short amnesty period granted by the Saudi Arabian government until July 3.

While other countries’ representatives, such as Pakistan and Bangladesh, focus on the goal of amnesty, Indonesian government is fuzzily entrapped on the debate over issuing passports or travel documents in Lieu of Passport (SPLP). As a matter of fact, the majority of SPLP holders are disrespectfully rejected by Saudi immigration.

Unexpectedly, central government sounds quite cool about the situation, dispatching a taskforce to deal with matters. Even though that is completely too late and, prior to arrival, the consulate will be burdened with a disorganized blietzkrieg,  handling a greater number of amnesty seekers.

Previously, Sharief Rachmat, an Indonesian worker residing in Jeddah, said that information regarding the amnesty application remained unclear. As a result, thousands of applicants are relying heavily on non-governmental activists disseminating the correct information.

Rachmat said the fact that the policy issued from the embassy and the consulate had differed led to accumulated confusion and public anger around Jeddah’s Indonesian consulate.

The Indonesian government did not properly anticipate the amnesty opportunity, as proven by the earlier services in the consulate, with the cost for communication and coordination in Indonesian bureaucracy being extremely high.

Witnessing the government’s response to the current chaos, which aroused an interchangeable blame game from ministries, it was frustrating not to know “who is responsible for what”.

First, a high number of labor supply-demand forces between Indonesia and host countries reached a level which undermined a growing pattern of migration. Unfavorable domestic wages for millions of villagers was forcefully brought to bear to meet the global demand for workers.

The state’s inability to lift-up low-income districts, as a product of uneven capitalistic development since 1980s (Berger, 1997), increased inequality. This, in one sense, provided labor for a new market, although with a high degree of informality.

Therefore, for people in a low-income district to survive (Sassen, 2003), the exploitative structure of domestic workers worldwide, was the only choice.

Pessimistically, the state, under the ongoing formulation of Indonesian Immigrant Worker Protection Bill, fails to acknowledge that an increase of outflow migration is a result of crippled job opportunities.

Second, the flow of people in two or more authoritative sovereignties requires a high degree of administrative documentation. Under the international labor supply-demand management, this has become a grey area in which manipulation for greater return is prevalent. This essentially maintains immigration barriers posed by both receiving and sending countries.

As a result, there are large numbers of undocumented migrants that are also the preferred channel for actors such as ill-disciplined private distributors or abusive state officials to obtain more levies.

Everyone knows how easy it is to duplicate our national ID or obtain passports with multiple identities, as well as any other document related to movement of people.

This has led to numbers of undocumented migrants, who have weak legal protection, including insurance. This well-maintained circle of rents is worsened by unilateral government support of private distributors (PPTKIS).

Immigrant Labor ID Card (KTKLN) procurement is also believed to have accumulated in the state’s alignment to reduce the responsibility of private distributor’s to provide delineated assistance over protection, while immigrants believe this as a source of further illegal levies.

Third, labor supply origins are diverged from villages within regencies, meaning that this has huge correlation to the expanding role of local authority. Decentralization’s primary mandate, autonomy of “governance” up to “revenue management”, brings more favor to remittance.

Rigidly examined, remittance from undocumented migrants in Sabah, Malaysia, that flew to East Flores Regency in 1997 was up to four times greater than the state’s provincial budget in East Nusa Tenggara (Eki, 2002). Therefore, central government should work more with local authorities for a more comprehensive solution.