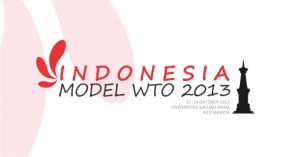 The Indonesia Model WTO 2013 is an international trade negotiation’s simulation forum that aims to create a different Model WTO experience for university students. This programme will be held for four days in Yogyakarta, Indonesia, by the students of MA in International Relations majoring Global Trade Diplomacy, Universitas Gadjah Mada, in framework of the Center for World Trade Studies and Postgraduate Program of International Relations, Universitas Gadjah Mada. As trade is the engine of global economy, the necessity to understand the role of WTO as the only global international organization dealing with the rules of trade between nations is becoming important. The WTO agreements are negotiated and signed by the bulk of the world’s trading nations and ratified in their parliaments. The goal is to help producers of goods and services, exporters, and importers conduct their business. This programme is welcoming multidiscipline students in the areas including but not limited to international relations, law, economic, and agriculture. Students from any other discipline who interested in international trade issues are also welcomed to join this programme.

(Director ASEAN Foundation and Former of Indonesia’s Ambassador for WTO)