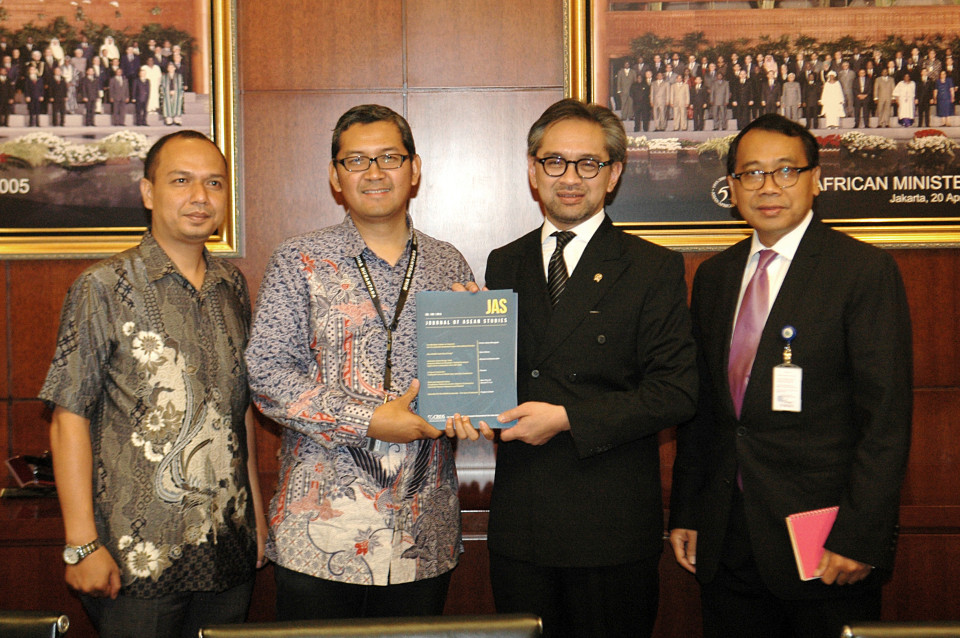 The Minister of Foreign Affairs of Republic of Indonesia, Dr. R.M. Marty Natalegawa, welcomed Editor-in-chief International Journal of ASEAN Studies (JAS), Tirta N. Mursitama, PhD, who is also the head of the Department of International Relations, School of Humanities, Bina Nusantara University in his office in Pejambon, Central Jakarta on 13 September 2013. This visit was a part of the 4th National Convention of Asosiasi Ilmu Hubungan Internasional Indonesia (AIHII) or the Association of Department of International Relations at universities in Indonesia. The convention itself will be held at Andalas University, Padang, West Sumatra, on 14-16 November 2013.

In that opportunity, Tirta N. Mursitama, introduced JAS as a journal published by the Department of International Relations, School of Humanities, Bina Nusantara University. This publication is in coordination with AIHII. Marty Natalegawa appreciates the existence of JAS and he hoped that JAS would be a media which could present current issues of international relations which are useful for the sake of academic life in Indonesia, especially for the social sciences. The Minister has also given his support of JAS publication and he is looking forward to the publication of resourceful articles that are written by academic practitioners, both from Indonesia and other foreign countries, so those articles could be suggestions for the Ministry in finding solutions for the phenomena of international relations faced by Indonesia.

JAS is dedicated to increasing the depth of the subject across disciplines with the ultimate aim of expanding knowledge of the subject. The topics addressed within the journal include, not limited to: diplomacy, political economy, trade, national development, security, geopolitics, social change, transnational movement, environment, law, business and industry, and other various related sub-fields. JAS also functions as one of the academic outlets to enrich current discussion both theoretical and practical on the issue involving ASEAN. Furthermore, JAS is also supported by renowned scholars in the field of International Relations, politics, and economics. Guide to authors and other details of JAS are available on https://ir.binus.ac.id/jas/