Petty theft: The Russian word for US sanctions 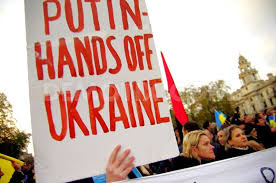 Southeastern Ukraine is now officially on fire, “Referendum, Russia!” is ceaselessly chanted by protesters. Pro-Russian militias have successfully seized government buildings, police stations, and military airports in a number of cities in the Kharkiv, Donetsk and Luhansk regions.

As the central government in Kiev organizes an “anti-terror” offensive against protesters and invites other countries to join them, satellite images show that Russian ground and air forces are building up neatly at the Ukrainian border, threatening a swift “humanitarian intervention” should Kiev follow through with a violent crackdown against its own Russian-speaking population.

The US has followed through with initial threats of “staged sanctions” against Russia, effectively freezing Russian assets and targeting a number of Russian banks.

Arguably, sanctions stand as one of the main roadblocks to finding an amicable, negotiated and mutually agreed upon solution for Ukraine.

First, US sanctions merely constitute “petty theft” against Russia. US sanctions remain a minor irritant, unable to impose compel or incentivize any policy change within Moscow. Economically, for a country that champions the free market, promotes free flow of goods and capital, and criminalizes government encroachment on businesses and private property, US imposed economic sanctions are problematic.

Proportional to its scale, US sanctions incur an economic opportunity cost in which Russian investments are postponed, business expansions halted, potential jobs and opportunities snatched.

They are merely a disguised form of spite-inspired political barriers raised to economically hurt an adversary’s economy and general welfare of its people.

In retaliation to US sanctions, Moscow is now tightening its grip on westward gas pipelines supplying energy to Ukraine and Europe — both most likely to be paying the indirect costs of US sanctions.

Second, US sanctions tend to divert international public attention and resources away from real military action and constructive diplomatic efforts. Posing as an equivalent and adequate substitute, sanctions effectively rob international crises of an actual solution.

The primary stocks on the Russian exchange have  lost value, the Russian ruble is down against the US dollar, billions of dollars’ worth of investment was lost to capital flight, escalation into “third phase” sanctions against Moscow was being considered, and Russian growth projections had been slashed.

However, it is important to understand that the ultimate objective of sanctions is a change in policy and state behavior, not economic damage per se. In that understanding, sanctions are proven to be effective only 5 percent of the time (Pape 1997).

The main political motive of US staged sanctions is mainly to save face at home and abroad — a very American compromise where Democrats can pat themselves on the back saying “at least we are not at war” while Republicans can do the same saying “at least we’ve got economic war”.

It spoon feeds the American domestic public, partner countries in Europe and the international media with the illusion that the US is actually doing “something” — when neither meaningful thoughts nor decisive actions have been taken to solve the crisis.

Third, US economic sanctions risk deepening international crises. A lot like drone strikes, US sanctions cause enmity to the wider public affected by it, even when sanctions were initially “targeted” only at one person or a small group. Something “international” will often turn into something “political and personal” when its effect is felt by and made visible to the layman. The US has imposed sanctions against Cuba, North Korea, Iran, Sudan and Syria — the list of failures is comprehensive.

Costs imposed by US sanctions, ironically, will only harden Russia’s position, making it harder for Moscow to back down, yield and forego previous and future gains from the crisis. Sanctions intended to “make sure that Russia pays” ironically made the annexation of Crimea more “transactional” and had effectively “indicated the market price” for Southeastern Ukraine.

US staged sanctions are not only “petty theft” but also literally “staged”. It is the pickpocket going into drama mode, an expensive political soap opera that the world does not want to see, a performance that the people of Ukraine is being held hostage to, with an overpriced invoice most likely to be paid for by Europe.

Unfortunately, the US tends to proudly flaunt its staged sanctions like the “emperor wears his new clothes”. Of course, no one will dare to say that Washington is playing Russian roulette with Ukraine’s head and billing Europe for the carpet cleaner’s bill.

The lessons of Ukraine for Indonesia’s coming presidential election are threefold. First, an inclusive national leadership is paramount in stressing that “Indonesianship” is an egalitarian comradeship, irrespective of creed, color and culture.

The big question of EU integration should have been answered by Kiev in consensus, through a democratic, inclusive and participatory manner, and carried out at a pace that was comfortable for the Ukrainian nation as a whole.

The question of Europe for Ukraine is the equivalent to the question of political Islam for Indonesia — a touchy, politicized and potentially divisive issue.

Leading presidential candidates playing footsie with Islamic parties should be critically scrutinized. Just like Ukraine’s geographic divide, Indonesia is not — and never has been — as monolithic as the moderate Muslim discourse might suggest.

Second, the national leadership must be able to manage the interests and insecurities of hegemonic and rising world powers wisely, or risk predatory dismemberment. Russia has swallowed Ukraine’s Crimea whole and is now eyeing Southeastern Ukraine, meanwhile, another “shock doctrine” highway robbery is about to take place in Kiev where the International Monetary Fund (IMF) is planning a bailout of US$15-18 billion.

With a “tradition” of choosing Europeans-only as doctor-in-chief with a long list of malpractice on East Asian patients, which includes Indonesia, many have now sarcastically — and correctly — termed its presence as “the cure much worse than the disease”.

Ukraine is now forced to choose between IMF conditionality, European “Greek tragedy” austerity economics, or Russia’s schizophrenic irredentism. With Western ambassadors already courting presidential candidates and China on the “charm offensive”, our elected president will need to navigate our nation, this “arc of diversity” ever so carefully.

Last, the national leadership must have an embedded “regional perspective” that accounts for the security and well-being of 600 million ASEAN citizens. The Ukrainian crisis shows that regional interests are inseparably woven together and the fate of a nation also rests on how the region respond to crises.

The West imposing (and lifting) sanctions on Myanmar, China testing the waters in the South China Sea, as well as Australia repeatedly breaching Indonesian waters are creating ripple effects for the region as a whole.