Corruption and banditry within the state 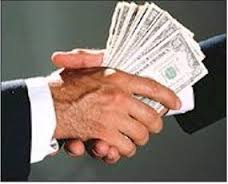 Corruption in Indonesia has intruded into almost all state apparatuses and business practices. Legislative, judicial and executive bodies are all involved in corruption, both by siphoning state funds and by directly and indirectly taking from people’s pockets in varied and unthinkable ways.

Government officials and lawmakers also steal social assistance funds (Bansos) for the poor and other charitable purposes. Indonesia may be proud of becoming the world’s 10th-biggest economy, but it is also the most corrupt among the top 10 world economies. If the lawmakers, budget makers, law enforcers and development budget program executors are all corrupt, can one expect that Indonesia will maintain its position among world economies?

Mancur Olson, a political scientist contributing significant thoughts to collective action and public choice theories, compared the corrupt behavior and actions with those of bandits — “roving” bandits and “stationary” bandits.

Roving bandits take everything they can reach because they do not have enough time to wait for long-term results, like warriors who conquer a territory or a city or a state and have to leave the territory and move elsewhere. They occupy a territory or position for a very short period of time, and lack time to invest in long-term economic actions.

Lawmakers and those in the highest positions of executive bodies might find that their roles are only for a short period — five years or less — too short for investing in long-term interests to accumulate wealth. The short period is used to drag the state budget as much as possible, whether directly through budget regulations or in other ways such as through development projects.

The use of Bansos for mobilizing votes is also one of these actions of “banditry”. If politicians use funds for the poor to mobilize votes, it is hard to expect that they will not repeat such actions when they sit on legislative and executive bodies.

The second group of “stationary” bandits involves people who have long periods in office. They can slowly accumulate wealth from siphoning state funds and assets within their reach in a piecemeal way. They make regulations to justify ways to enrich themselves from their positions or to enjoy a highly exclusive way of life.

Their actions might include setting high costs for frequent monitoring of projects that in fact only consist of one or two monitoring activities; charging extra fees for each project; incurring costs for business class travel when in fact they travel by economy class; charging for five-star hotels when they use much cheaper hotels; requiring percentages of advance transfers from the winning bidders of government projects; delaying processing of documents to attract side payments; creating fake projects; and many others.

Such “bandits” can also play around with budgeting for routine activities, such as the annual procurement of computers, which would make every room in an office full of computers, though an inspection would reveal very few. The accumulation of wealth, justified by regulations, is slow but certain and pervasive.

The results are of course that the bandits get richer by taking away most of the development budget, and the poor live in even deeper poverty and destitution, placated by promises from the political bandits. The richer a country or a region is, the more rampant the actions of both roving and stationary bandits will be. It is worrisome that the larger the size of Indonesia’s economy, the more bandits and the more expansive their reach will likely be.

Much has been done to eradicate corruption, but it seems ineffective at stopping all this banditry. To prevent the actions of “roving” bandits, both prevention and enforcement are fundamentally important. The lawmakers have to be prevented from being involved in the discussion of budgeting down to project details, and from involvement in procurement decisions.

The offering of public positions to candidates with the highest scores (lelang jabatan) introduced in Jakarta by Governor Joko “Jokowi” Widodo and Deputy Governor Basuki “Ahok” Tjahaja Purnama for the city’s bureaucracy is one effective measure of preventing corruption by the “stationary bandits”. The highest ranks in all levels of bureaucracy and ministries have to be appointed through this type of open bidding.

By institutionalizing this bidding for public office, the bureaucrats can focus on promoting their capacities and professionalism for higher mobility within the bureaucracy, rather than being busy collecting wealth to bribe the upper ranks for higher positions.

Budget tracking by the public, transparent governance and development monitoring by local councils should be institutionalized to reduce “stationary” banditry. Public evaluation and “tribunals” of development programs at all levels of government might be also an innovative way to warn the bureaucracy that there are eyes watching them everywhere.

The writer, a lecturer in international relations at BINUS University in Jakarta,
The article was published in the Jakarta Post