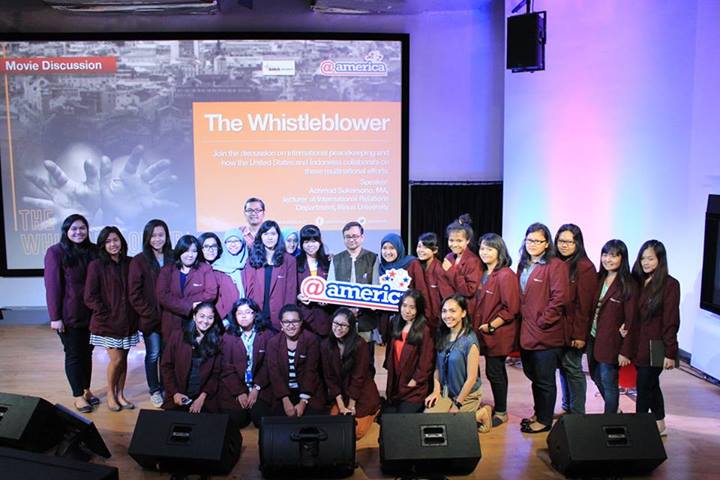 “Wars bring out the best and the worst of humanity” was the first sentence uttered by Mas Achmad in his opening remark at the event of film showing and discussion held at @america on Wednesday, May 28th, 2014. Having heard what was said by Mas Achmad, the students and some other guests who attended this event turned down their voices and became quiet to listen his further explanation about “The Whistleblower”, a movie which has been inspired by actual events and has highlighted a dark side of the activity of United Nations (UN) in their peacekeeping effort . After a brief opening session, the film showing began.

“The Whistleblower”, directed by Larysa Kondracki and released in 2010, is a movie based on the true story of Kathryn Bolkovac, a police officer from Lincoln, Nebraska, who accepted an offer to join the U.N. peacekeeping mission in Bosnia in 1999. During her assignnment, Bolkovac  found evidence that underage girls were being held captive and bought. Then those girls were sold in a profitable sex trafficking operation. When she presented her evidence, her superiors ignored her. Bolkovac was fired because she persisted on what she has found. The activities of the American private security firm, DynCorp International, that  should be responsible for these crimes and tried to cover them up, were at the center of Bolkovac’s report. She also found that local police and U.N. peacekeepers themselves were also deeply involved.

Having finished to watch the eye-opening and shocking scenes for almost 112 minutes, the students had several questions to discuss not only with Mas Achmad, but also with Dr. Gautam Kumar Jha, assistant Professor from Jawaharlal Nehru University, India who was having his visit to Indonesia at that time. Several questions were asked and various impression after watching the movie was stated by the students of International Relations, Binus University. In this session, Mas Achmad advised the students to read more books, newspapers and articles, to watch more movies, to attend many seminars and discussion, so the students will be able to see a matter from different points of view and to bring up their critical way of thinking. We thank the Department of International Relations of Binus University that has arranged this event and a credit should be given to @america which has given a space to express a freedom of speech without taking side to one party.