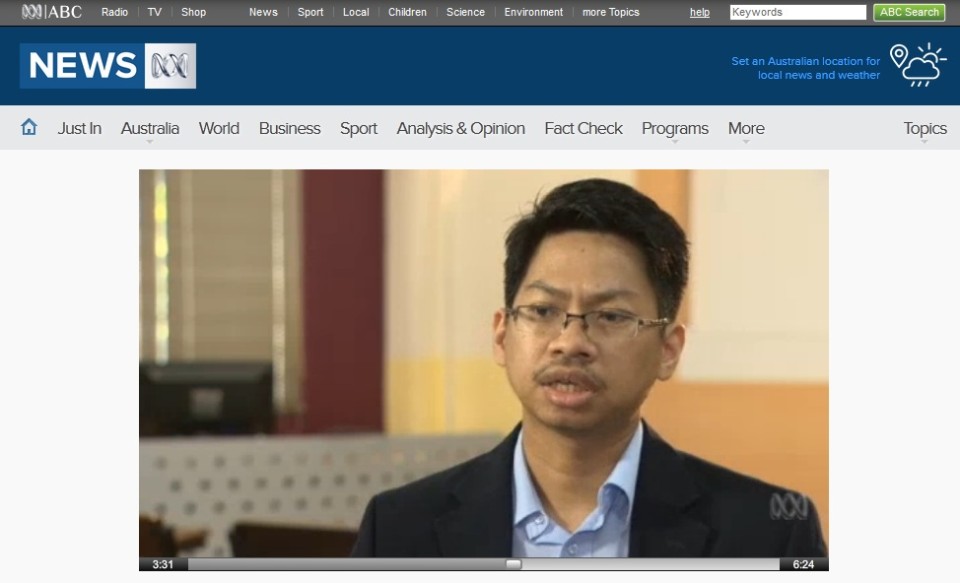 TONY JONES, PRESENTER: In Indonesia, the latest polls suggest support for the former military strongman Prabowo Subianto is surging with less than two weeks to go until the presidential election. While figures vary, the trend clearly shows that early favourite Joko Widodo’s massive lead has shrunk throughout June. Both candidates have been openly critical of Australia and foreign policy analysts are now busily reassessing how each of them would deal with governments across the region. From Jakarta, Greg Jennett reports.

GREG JENNETT, REPORTER: One’s traditional, one’s modern. Both hold out the promise of change and prosperity, but the choice between them couldn’t be starker. At the ballot box, Indonesians will decide: is it old school or new style for the next five years?

Prabowo Subianto is a human and political force of strength, an establishment figure who’s strong on nationalism and antagonistic to those who would block Indonesia’s rise.

PRABOWO SUBIANTO, PRESIDENTIAL CANDIDATE (voiceover translation): We will secure all the wealth that belongs to Indonesia because the wealth must be used first and foremost for the prosperity of the people.

GREG JENNETT: Joko Widodo is the self-styled common man candidate who’s rewriting the rule book on how to make it in Indonesian politics.

Jokowi, as he’s known, only entered public life nine years ago as mayor of his home town of Solo. He made big changes there, rode a wave of popular support to switch to Governor of Jakarta, and after just two years in that job, was nominated by Megawati Sukarnoputri’s party to run for President.

JOKO WIDODO, INDONESIAN PRESIDENTIAL CANDIDATE (voiceover translation): God willing, the people decide who the President is and the people put their trust in me in July. I will keep serving them.

GREG JENNETT: Weeks ago, this election looked like it was Jokowi’s to lose. Since then, his solid lead in the polls has been eroded by a fast-finishing Prabowo. But with an electoral roll of 190 million voters, the undecideds still number in the tens of millions. The final days of campaigning are all about them.

ANAS AJA, MOTORCYCLE DRIVER (voiceover translation): I haven’t decided my choice yet, until the last seconds in the booth, I guess. Wherever my heart leads me.

DINA KHAERANI, STUDENT (voiceover translation): I kind of lean more to one, number one, because he’s firm, but number two, you know, number two has better coalitions, but on the candidacy itself, I prefer number one, so I’m still confused.

In between continuous analysis and candidate debates, there’s a view that Indonesians are looking for something bolder now after 10 years of Susilo Bambang Yudhoyono’s style of steadiness and a frustration that the country should do more to capitalise on South-East Asia’s rapid growth in wealth.

GREG JENNETT: The rival campaigns tailor their prosperity pitch to low-paid masses in similar ways. Their economic policies seek to build a bigger tax base, expand agriculture and pour hundreds of billions of dollars into ports and roads. Jokowi thinks growth of above seven per cent is achievable. Prabowo’s brother and advisor Hashim is aiming even higher.

GREG JENNETT: Unlocking economic potential is a crucial first step on the way to a bigger strategic goal: a powerful Indonesia which commands respect in the region, including Australia’s.

PRABOWO SUBIANTO (voiceover translation): We don’t want to cause trouble. We want to live in peace and be friends with Australia. We aren’t a threat for Australia.

GREG JENNETT: Differences over boats and spying haven’t been fully resolved and may not be by the time the new president takes office in October.

HASHIM DJOJOHADIKUSUMO, PRABOWO ADVISOR: These leaders are – they are very rational. They’re also willing to sit together with you in order to discuss many issues, yeah.

GREG JENNETT: Analysts believe much of the talk of strength is election rhetoric, only a threat to sovereignty would cause serious friction.

HASHIM DJOJOHADIKUSUMO: I don’t think they will not go as far as to have a new conflict with you, but they will be more rational, they will – Prabowo will want to show that he’s more decisive compared to the current administration, SBY.

GREG JENNETT: Which comes back to the question of backgrounds. Jokowi’s rapid rise in politics makes him less schooled in diplomacy. Prabowo is perhaps more suited, except his record as a former military strongman precedes him, along with persistent human rights questions about his role in abducting student demonstrators 16 years ago.

If the polls and Prabowo’s campaign team are right, Indonesia’s in for a tight finish. The election process itself has stirred ambitions for change and a new way of doing things in Indonesia after 10 years. The victor’s burden in office – whoever it is – will be to meet those expectations.