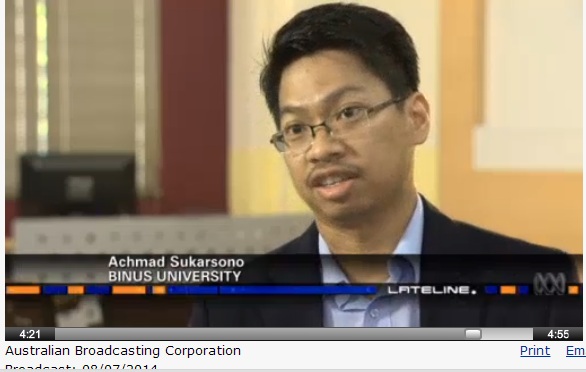 Too close to call Indonesian election 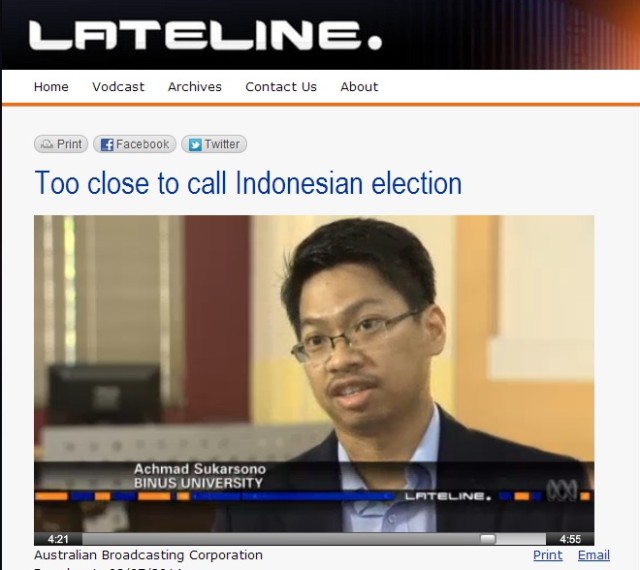 As Indonesians head to the polls to elect a new president neither Prabowo Subianto nor Joko Widodo is a clear favourite to win.

EMMA ALBERICI, PRESENTER: Tomorrow Indonesians will choose just the second directly-elected president in the country’s history. The latest opinion polling suggests a tight result, with just 3.6 per cent separating the two candidates. The former military general, Prabowo Subianto, has come from behind to almost close the gap on Joko Widodo, who had long led the polls with margins in double figures. Indonesia correspondent George Roberts takes a look at how the media has shaped the campaign.GEORGE ROBERTS, REPORTER: For the best part of 70 years, Daryini’s been living in the village of Brebas in Central Java.DARYINI (voiceover translation): I gather grass to feed my goats. I have eight goats. I had 12, but because I found it hard to gather the grass for them, I had to sell four.GEORGE ROBERTS: He’s never learned to read or write, but he knows he’ll vote for Joko Widodo.DARYINI (voiceover translation): All I know is that I will vote for the picture. I will vote because there will be a picture there. I use the picture as the reference.GEORGE ROBERTS: Daryini’s on of the tens of millions of working poor in Indonesia. He lives in the heartland of support for Joko Widodo, where the presidential hopeful is so popular his convoy grinds to a halt as it passes through.Everywhere Joko Widodo seems to go in Java at least, he creates this kind of hysteria, madding crowds keen to shake his hand or take a selfie or perhaps grab a free campaign T-shirt.But there are 185 million voters to woo. In a country where traditional media is still growing, the image of a potential president beamed into homes and villages has significant sway.That media power has been used unashamedly.ACHMAD SUKARSONO, BINUS UNIVERSITY: It’s the worst election than before when we talk about the neutrality of the media.GEORGE ROBERTS: Reportedly in return for a cabinet position, Prabowo Subianto secured the backing of media billionaire Aburizal Bakrie. It’s become media drone political warfare. Mr Bakrie’s tvOne network has been beaming back live pictures of Prabowo’s every move.Fighting on Joko Widodo’s behalf is Metro TV. Its billionaire owner, Surya Paloh, whose party is in coalition with Joko Widodo, has also joined the campaign trail.SURYA PALOH, INDONESIAN MEDIA TYCOON (voiceover translation): Eventually, we have to admit and be honest to ourselves that Jokowi is a great man. He is eligible to be a presidential candidate and the President of Indonesia.GEORGE ROBERTS: In return, Metro TV gets interview priority and exclusive access to the potential next president.In the past few weeks, Prabowo Subianto has significantly closed the gap on the previously clear favourite, Joko Widodo. He’s spent up big on rallies and sharp TV advertisements.TV time only goes so far though. In this election, there’s an estimated 67 million first-time voters. They’re going mobile and online.VOX POP: I mostly use Facebook and Twitter, because it’s easy to share our minds and everything, and about this election, also, yes, a lot of posting about the elections.VOX POP II: It makes me more easier to choose which one better, which one have the black campaign, which one have the white campaign or something. (Laughs)GEORGE ROBERTS: Jakartans are considered the world’s most active Twitter users. But the professionalism of Prabowo’s team has almost allowed him to airbrush his past from history. The former military general who was discharged in disgrace after the fall of his father-in-law and dictator Suharto has barely suffered from the human rights abuse allegations against him.ACHMAD SUKARSONO: The marketing part of Prabowo is trying to hide all of that and it is kind of hard to believe if you know the history of Prabowo that he can do that.GEORGE ROBERTS: Whether this seemingly endless campaign coffers have bought Prabowo a win is yet to be become clear. The latest opinion poll puts Jokowi just 3.6 per cent in front.George Roberts, Lateline.