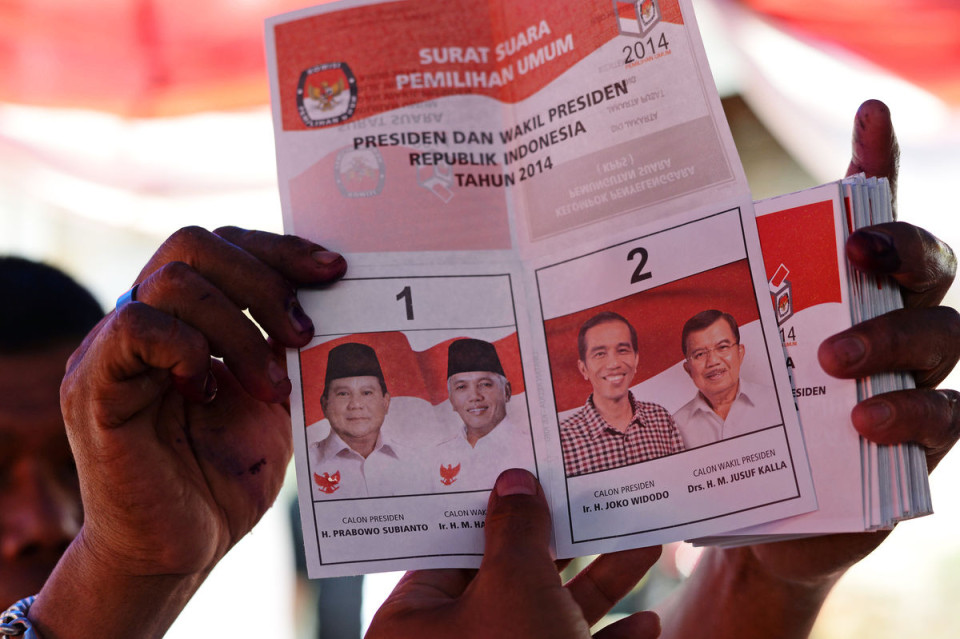 The seven-member General Elections Commission is tallying ballots from the July 9 ballot, with official results due in less than two weeks. About 140 million votes need to be added up across an archipelago that would stretch from New York to Alaska, with the numbers passing through village, district, provincial and regional tabulation centers before reaching Jakarta.

Quick counts released after polls closed three days ago mostly show Widodo, 53, known as Jokowi, with a lead of two to six percentage points. Prabowo, in an interview with the British Broadcasting Corp. yesterday, expressed confidence he outpolled his rival.

“If he is certified winning fairly, of course I will concede,” Prabowo said. “If Indonesian people don’t need me, I’m fine. I’ll go back to my quiet life. I’m only doing this out of obligations to Indonesia.”

While the election was violence-free and Jakarta’s streets quiet yesterday, a result seen as questionable by either side risks legal challenges and public protests. Even after the country moved to direct presidential elections a decade ago, having shaken off the rule of dictator Suharto in 1998, graft is widespread, with Indonesia ranked 114th among 177 countries in a 2013 Transparency International corruption perceptions survey.

“This is a test of Indonesia’s democracy, our maturity to practice democracy,” said Hikmahanto Juwana, a professor of international law at the University of Indonesia near Jakarta. “The burden is on the election commission now, and then people must refrain from doing anything that may provoke conflict or social unrest.”

If Jokowi is confirmed the winner, he will become Indonesia’s first leader without ties to Suharto. Unofficial counts conducted by the established survey companies have been accurate in all presidential and parliamentary elections in the past decade.

Prabowo, 62, who was once married to the dictator’s daughter and was dismissed from the army for links to human rights abuses, cites counts conducted by companies he uses for guidance showing him with a small lead.

Both candidates in their victory speeches called on supporters to guard against attempts to manipulate the official tally. Outgoing President Susilo Bambang Yudhoyono, whose term ends in October, urged supporters on both sides to remain calm after the vote, which followed the most divisive campaign in Indonesian history.

“The next two weeks will inevitably be fraught with tensions,” said Keith Loveard, head risk analyst at Jakarta’s Concord Consulting, which provides security services, training and assessments. The victory declarations by the two camps were moves to set the tone for the wait ahead, he said.

“This attempt to influence the national psyche would then presumably make it more difficult for their opponents to argue otherwise,” he said. If the results don’t go as planned, it also creates “a more dangerous situation in which people would be more fired up and likely to explode.”

Speaking ahead of the election, army chief of staff General Budiman said the potential for conflict between supporters of Prabowo and Jokowi was “high,” the Jakarta Post reported on its website July 7.

“We are getting more alert because the voting gap is likely to be very small,” the paper cited him as saying.

Before the election commission, known as the KPU, can announce the results on July 21-22, it must tally votes cast across the world’s fourth most-populous nation. It projected before the ballot that the turnout would be 75 percent of the country’s 190 million eligible voters, and said July 10 it did not yet have the confirmed figure from July 9.

The results are hauled, sometimes by horseback and on foot, from polling stations on 900 inhabited islands to regional centers. While counting at local booths is done publicly — those figures form the basis of the quick counts — adding the results up is done in secret.

Getting the results to Jakarta takes several steps: A sheet with the polling station tally is sent to the nearest village to be amalgamated with other results, then sent along several further stops — including the district level — where they are added again before reaching the capital, said Paul Rowland, a Jakarta-based political analyst and former Indonesia country director for advocacy group the National Democratic Institute.

“We respect the KPU process and are optimistic about the result,” said Sandiaga Uno, a spokesman for Prabowo.

Rowland said if someone were to try to change the numbers, it would take place at the middle stages of the process where there are hundreds of lower-level officials overseeing the tallies, including commissioners for each province and district.

“The central commission is fine, as the election monitoring body and the board of trustees are present,” said Maswadi Rauf, a political science professor at the University of Indonesia. “The weak spot is at the district level” as a high number of officials means “supervision is difficult.”

Voters have photographed results at local booths and posted the pictures on the Internet, in a grassroots monitoring effort to help ensure the count is fair, the Jakarta Globe reported yesterday.

“I want to help send my future leader to the presidential seat so I have to guard the vote,” the newspaper quoted Asep Saefudin, a screenwriter, as saying.

Most quick counts give Jokowi a buffer of about 8 million votes, based on Bloomberg calculations. That’s going to be difficult for Prabowo to overcome, said Kevin O’Rourke, a political analyst who wrote the book “Reformasi: The Struggle for Power in Post-Soeharto Indonesia.”

“It’s a big enough margin to be safe,” he said. “Prabowo’s best chance is the constitutional court, but he’s got to have some kind of claim or evidence. There’ll be a lot of scrutiny.”

If the constitutional court were to accept a case, election rules state the nine judges would hear arguments in August and rule by Aug. 24. The court has its own history of corruption, with the previous chief justice, Akil Mochtar, serving a life sentence after being found guilty of graft and money laundering in a case the court heard involving a local election challenge.

As the vote tallying gets under way there are signs of disunity within Prabowo’s coalition. Zainal Bintang, a deputy chairman of the Golkar party’s advisory board, said it “can’t be in opposition,” indicating it may seek to switch to Jokowi should he win the presidency.

“With a victory of Jokowi-JK already certain, Golkar as an institution should know itself, especially those who are backing Prabowo,” Zainal said, referring to Jokowi and his running mate, ex-Golkar chairman Jusuf Kalla.

Golkar was the political vehicle for Suharto and has been in government for the past decade. It has played some role in running the country throughout the post-Suharto era. If Golkar were to switch sides it’d give Jokowi’s coalition 53 percent of parliamentary seats.

One of Yudhoyono’s last acts before leaving office may be convincing the Jokowi and Prabowo camps to abide by any court decision and ensuring the military stays out of any dispute, said Achmad Sukarsono, associate fellow at Jakarta-based research institute The Habibie Center.

“If he decides to take sides and allow the military elements to get involved in the contest, this can go ugly,” he said. “The nation is now waiting for cool heads to prevail. SBY can ensure that by meeting the former generals in each camp. They have known each other for decades,” he said, referring to Yudhoyono by his initials.

To ensure his legacy, Yudhoyono is likely to try to make sure the transition goes smoothly and that democracy prevails, O’Rourke said.

“Despite certain setbacks in recent years, Indonesia’s democratic institutions are still sturdy enough to withstand potential attempts to abuse them,” he said. “Adequate safeguards are in place to support another peaceful handover of power.”

To contact the reporters on this story: Chris Blake in Jakarta at cblake28@bloomberg.net; Brian Leonal in Singapore at bleonal@bloomberg.net