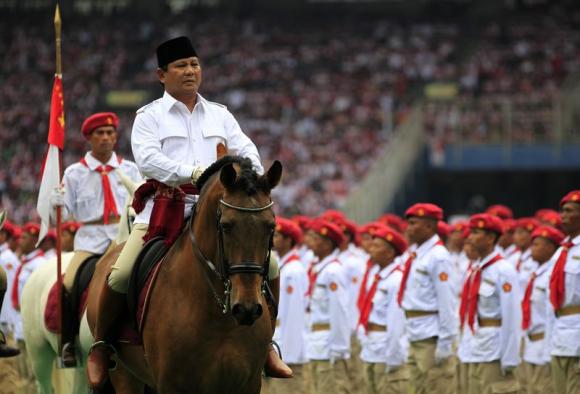 BY KANUPRIYA KAPOOR AND JONATHAN THATCHER

(Reuters) – After spending a decade, and a chunk of the family fortune, in trying to become Indonesia’s president, an outraged Prabowo Subianto watched as leadership of the world’s third-largest democracy slipped through his fingers this week.

The question now is whether the former special forces commander with a shadowy human rights reputation has any political muscle left to try to influence what direction Southeast Asia’s biggest economy now takes.

Prabowo, 62, is planning to go to the Constitutional Court over what he alleges was massive fraud during the July 9 presidential election that saw his rival, Jakarta governor Joko Widodo, win by a slim margin.

But the case looks more like face-saving and few see it having any chance of changing the official outcome of an election which saw a new breed of politician triumph over the members of the political or military elite who have traditionally dominated Indonesia’s leadership.

Prabowo, from one of the country’s most illustrious and wealthiest families, is staring at an uncertain future in opposition, with the prospect of his allies being tempted away by the man who beat him.

“For Prabowo, nothing looks good on paper at the moment,” said Achmad Sukarsono, an analyst from The Habibie Centre think tank. “Prabowo is not a legislator. Once he doesn’t win the election, he doesn’t have a political job,” Sukarsono said.

Prabowo, who was discharged from Indonesia’s military in 1998 for the kidnap of pro-democracy activists, oversaw a highly organised and aggressive campaign that brought him from distant second to within a hair’s breadth of the presidency. He has never been charged in court for the offence or for any other allegation of human rights abuses.

He does still have his own party Gerindra, or Great Indonesia Movement, which under his leadership has surged into becoming the third largest in parliament.

Members of his inner circle say they are intent being a potent counterbalance to Widodo.

Currently backed by a coalition of six parties, Prabowo effectively controls nearly two-thirds of the incoming parliament, which analysts say could pose a challenge to Widodo’s reform agenda.

“If I were to have a say, I’d be a very vigilant opposition party,” Prabowo’s tycoon brother and top aide Hashim Djojohadikusumo told Reuters.

But he also acknowledged their “permanent coalition” may not hold. Prominent figures in allied parties, including the country’s second-biggest party, Golkar, have already hinted at defecting to Widodo’s side.

Even if the coalition stays together, Prabowo may be forced to play second fiddle to the larger Golkar, said Dradjad Wibowo, the deputy head of the National Mandate Party, another coalition partner.

“I’m not sure Gerindra can lead the…opposition, because they don’t have the highest number of seats in parliament,” Dradjad said.

Wibowo also played down the potential for the opposition to play spoiler to Widodo’s reform program.

“Our coalition would have a much higher bargaining position than any coalition in the past,” Dradjad said. “But Indonesia is not America. We have no appetite to block what a legitimate government is doing.”

Prabowo has long been entwined with the elite. His grandfather established Indonesia’s central bank, his father was a government minister and one of Indonesia’s most respected economists, and his former father-in-law was long-ruling autocrat Suharto.

Among the incoming cohort of Gerindra parliamentarians are two children of Prabowo’s brother, Hashim.

“It’s not like my family is going to go away just because of this election,” Prabowo’s niece and incoming Gerindra lawmaker, Rahayu Saraswati Djojohadikusumo, told Reuters. “We will focus on parliament and we are committed to making sure that programmes for the people get implemented.”

Prabowo brought a populist economic platform to the election that had been crafted over years and which party officials say he will stick to.

And just how bitter the coming years will be may come down to the personal relationship between Prabowo and the man who beat him, said Aryo Djojohadikusumo, another incoming legislator from the family, and Prabowo’s nephew.

“It’s up to Jokowi if he wants to uphold his own promise of reconciliation,” he said. “If Jokowi decides to embrace Prabowo as an elder statesman in the running of the country, then Prabowo will accept that.”