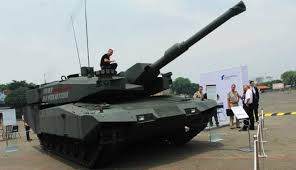 Our Deputy Head, Mutti Anggitta, participated at Indo Defence Seminar 2014 “Exploring Defence Offset in Indonesia : Expectation, Partnership, and Strategies of Engagement ” held by the Indonesian Ministry of Defence. Our lecturer who teach Strategic Industry & Global Security module this semester, Curie Maharani, was also actively involved in organizing the seminar. The topic of the seminar is very sexy, but sadly not widely discussed yet, especially in universities in Indonesia.

‘Offset’, as mentioned in Peraturan Pemerintah No. 76 Tahun 2014, is arrangements between the government and suppliers of weapons from abroad to return to the most value contract purchaser. Offset can be in the form of coproduction, joint ventures, buy back, knowledge transfer, and training.” To the present time, Indonesia still does not have a formal offset policy. Interestingly enough, a defence economics expert from Cranfield University, Prof. Ron Matthews, thinks that offset in Indonesia has been pretty successful by using informal approach.

In the long run, of course it is not very strategic to just rely on informal approach. Indonesia has to finish quickly its much awaited defence offset policy. In developing an effective offset policy, as argued by Prof. Matthews, a state has to set its aims clearly and to create feasible and realistic objectives. A state also has to focus on what it is trying to achieve, whether the policy sustain indigenous industries in the long term, and whether indigenous industries have the necessary capacities. Let’s hope that Indonesia can manage its ambitions and drive for sustainable capacity!