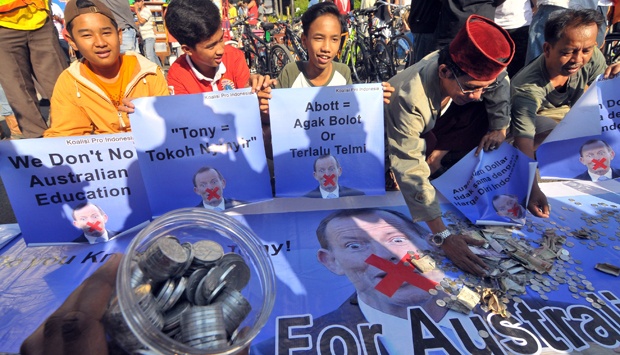 Look into the eyes of an Indonesian child who lost everything to the Indian Ocean tsunami — including parents, siblings and his pet dog — and say: “We gave you a Christmas box back then, now we expect something in return.” An unthinkable form of moral extortion? Not really. In a jarring display of diplomatic ingenuity, Australian Prime Minister Tony Abbott has linked the Bali Nine clemency demands with the A$1 billion (US$778.6 million) worth of Australian aid given in the aftermath of the Indian Ocean tsunami that left Aceh devastated 10 years ago.

In Indonesia, the comment is perceived as “offensive diplomacy”, which deviates greatly from the conventional “diplomatic offensive” conducted by other countries that are also trying to save their citizens from Indonesia’s death row. The statement compelled Indonesian Foreign Ministry spokesmen Armanatha Nasir to speak out against the diplomatic language that Australia is using, viewing it as a shift from mere interventionist pressure into gestures of threat.

A spill motion against Abbott’s leadership launched earlier this month seemed to have encouraged the Australian prime minister into “jumping the shark” on the issue. Attempting to win support from the Australian public and fellow politicians, Abbott is doing what he does best: putting bilateral relations with one of Australia’s most important neighbors on the sacrificial altar.

Indonesia’s upbeat nationalist undercurrent following the 2014 election, unfortunately, might be playing out against Australian demands for clemency. Indonesians have been demanding that President Joko “Jokowi” Widodo show firmness in stance, provide legal certainty, enforce the rule of law and not cave in under international pressure. What was previously a matter of morality is slowly shifting into a matter of national resolve and dignity.

The previous #boycottbali campaign, made popular by Australian Foreign Minister Julie Bishop’s comment, was a counterproductive form of preemptive moral retribution that punishes Bali for executions that, ironically, have yet to be performed. Indonesians have strongly objected to innocent Balinese bystanders and local businesses being targeted because of a law that applies nationwide. The campaign further diminishes any incentives for Balinese and Indonesians in general to rally alongside the now exclusively Australian cause. Tracking developments in social media, a backlash is emerging from the Balinese public and prominent artists.

In the last five media interviews that I have done with a number of Australian media, I repeatedly pointed out that the #istandformercy campaign failed to gain the traction it badly needed and did not strike a “cultural chord” within Indonesia. The campaign would have had a much more powerful effect on President Jokowi had it been more inclusive and included Indonesians alongside Australians.

Although the moral message was a compassionate and heartfelt one, the language of “standing up” can be easily misread as one implying moral superiority, defiance and demand. Why not involve some Indonesian lawmakers, religious leaders, writers and artists who Jokowi can actually recognize in the video? Even better, have all the Australians wear batik as a gesture of humility and convey the message in the most polite variant of Javanese language that Jokowi might better relate to and sympathize with?

Human rights, life and dignity might be universal values, but their promotion necessitates a measure of creativity and innovation that takes advantage of local conditions as strategic leverage. Understandably, the frustration and distress felt by the Australians are very real as both nations are being held hostage to prolonged uncertainty surrounding the executions. To be fair, Indonesia’s continued delay of the executions is akin to a botched execution and has been excruciatingly painful to witness.

I sincerely believe that mercy, compassion and unconditional kindness are what make this violent world we live in slightly more tolerable. However, people should never stand for ignorance. Moral intention does not necessarily guarantee moral outcomes. Abbott’s insistence on abrasive diplomacy might get the Bali duo shot twice, with the bullet invoice being sent to the Australian Embassy in Jakarta. I plead for Abbott to stand down for mercy instead; take a step back and carefully assess which forms of public and diplomatic engagement have (and have not) worked to date.

Unnecessarily riling up an Indonesian president already under intense domestic pressure with a nationalist government, opposition and public now saber-rattling behind him will not further Australia’s case for clemency. It could also have a negative impact on the clemency chances of the many remaining non-Australian citizens on Indonesia’s death row, a consideration that Abbott seems to have overlooked.
The #istandformercy, #boycottbali and Abbott’s comment to “remember Aceh” were three moral arguments that did not resonate well with the Indonesian public.

Although a “moral condemnation” template might be convenient, it has proven to be ineffective most of the time. Transnational campaigns are immensely powerful only when their engagement strategy remains inclusive, culturally sensitive and tailor-made to take advantage of existing political undercurrents. Why not appeal to Jokowi’s election promises and leverage on Indonesian nationalist sentiment instead? Australia could have signed a formal commitment to help future Indonesian diplomatic efforts in protecting its domestic workers abroad in return for a moratorium on capital punishment.

That way, Jokowi could actually justify granting clemency with the justification that a greater Indonesian nationalist objective was being accomplished. There are so many possible alternative approaches to the issue.

Obviously, Australian re
quests for clemency do not have to be in contradiction with Indonesian aspirations for a more “firm” and nationalist foreign policy outlook. However, the fact that Abbott and Bishop could not come up with any better moral reference other than “remember Aceh” and “boycott Bali” is somewhat disappointing.