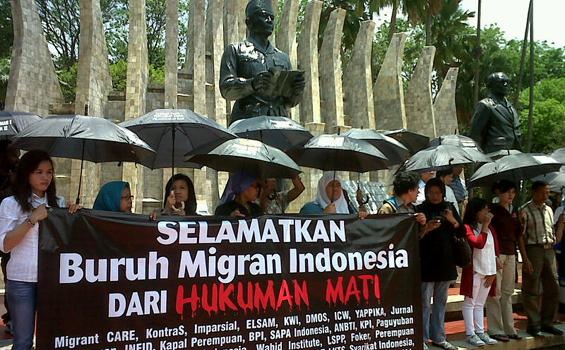 Only hours after the government proclaimed a ban on sending domestic workers to 21 countries in the Middle East, a group of migrant workers on social media began questioning their futures.Aside from the prevailing sadness about the two executed Indonesian migrants in Saudi Arabia a few weeks ago, this policy had been hinted at by President Joko ?Jokowi? Widodo months before.

Given the plight of female Indonesian workers in the Middle East, this policy may answer the state?s ongoing efforts to protect Indonesian citizens abroad. But unlike commodities the movement of people is harder to control. Indonesian migrant mobility is largely motivated by demand from more developed countries, not under a specific mobilization. Indonesia has been shifting from a centralized control of migration during the Soeharto era, to a decentralized one. However, the government seems to find it hard to distinguish between ?protection? and ?restriction?.

The unfinished adjustment of migrant management based on the new Law No. 39/2004, which involves growing institutional rivalry between the Ministry of Manpower and the National Agency for Placement and Protection of Indonesian Migrant Workers Abroad (BNP2TKI), widens the complexities of this issue.

Recalling the ?honeymoon? period of migrant placement in the Middle East, Saudi Arabia started the trend of being a regular recipient of Indonesian migrants. In 1983, as demand outgrew supply, the Indonesian government even gave special treatment to recruiting agencies from Saudi Arabia. A block visa was designed at that time to facilitate and accelerate recruitment.

The honeymoon was shaken after 2002, when the Malaysian government deported thousands of Indonesian immigrants who had allegedly entered illegally. The messy government handling of the returnees led to the drafting of Law No. 39/2004 on the placement and protection of Indonesian migrant workers abroad.

The Indonesian government ultimately perceived an end to the honeymoon after Ruyati Satubi was covertly executed by Saudi Arabian authorities in 2011, which led then president Susilo Bambang Yudhoyono to establish a presidential task force to deal with the issue, without pronouncing the necessity of an overwhelming moratorium.

The decision to halt the placement was followed with an adjustment period, meaning that the ongoing applications were still allowed to progress with three months to go. One obvious consequence was a massive placement of documented migrants in the Middle East within this period by recruiting agencies that would fold thereafter.

In fact, until today, the number Indonesian immigrants in Saudi Arabia alone reportedly accounts for the second largest non-Saudi population together with Pakistan and Bangladesh, that is about 1.5 million each. This number leveled off in 2011, after the Indonesian government announced the moratorium on the placement of domestic workers in Saudi Arabia and five other neighboring countries.

However, the first moratorium, which applied to Saudi Arabia, Kuwait, Syria, Jordan, Qatar and the United Arab Emirates, did not stop the movement of Indonesian migrants into those countries. Jejen Nurjannah, an Indonesian migrant defender from Sukabumi regency in West Java, testified that some still attempted to enter those countries through neighboring nations.

The state may stop the sending of migrant domestic workers, but the market will not dry up. Under this moratorium there will be an absence in the Saudi workforce of nearly 1 million people — which will generate an increase in jobseekers coming to the kingdom, including the existing Indonesian network. Therefore, this moratorium will mean the movement of Indonesians to the Middle East will be more difficult to monitor than ever before.

The policy also reflects the fact that the state has thrown in the towel on reforming the convoluted regulatory framework of migration management. This framework has contributed to brokerage practices that entail the risk of trafficking-like practices. The bill on the protection of Indonesian migrant workers abroad is also slow in its progress, hampering reforms involving stakeholders.

Rather than fatalistically stopping the placement, there are several things that could be done to ease the plight of Indonesian migrants abroad. The state could pursue the ongoing negotiation for protection that is enabled under a bilateral scheme.

The state could also highlight the fair-trial process in the destination countries by involving civil society, as a majority of the legal systems in the Middle East are far below international legal standards. For instance, the criminal law that is applied in Saudi Arabia is subject to gender discrimination, according to Human Rights Watch.

Amid the state?s attempts to entirely stop the placement of informal migrants by 2017, the state has yet to provide employment security domestically. The development of centers of growth must be evenly distributed, especially in the hotbed of migrant workers such as West and East Nusa Tenggara. The bill on domestic workers? protection that would be a national guarantee for the profession is also yet to be passed.

Travel is the fundamental right of every citizen as guaranteed under the International Labor Convention No. 143 as well as under our Constitution. The state should first provide a safety net rather than banning citizens from traveling ?for their own good?.