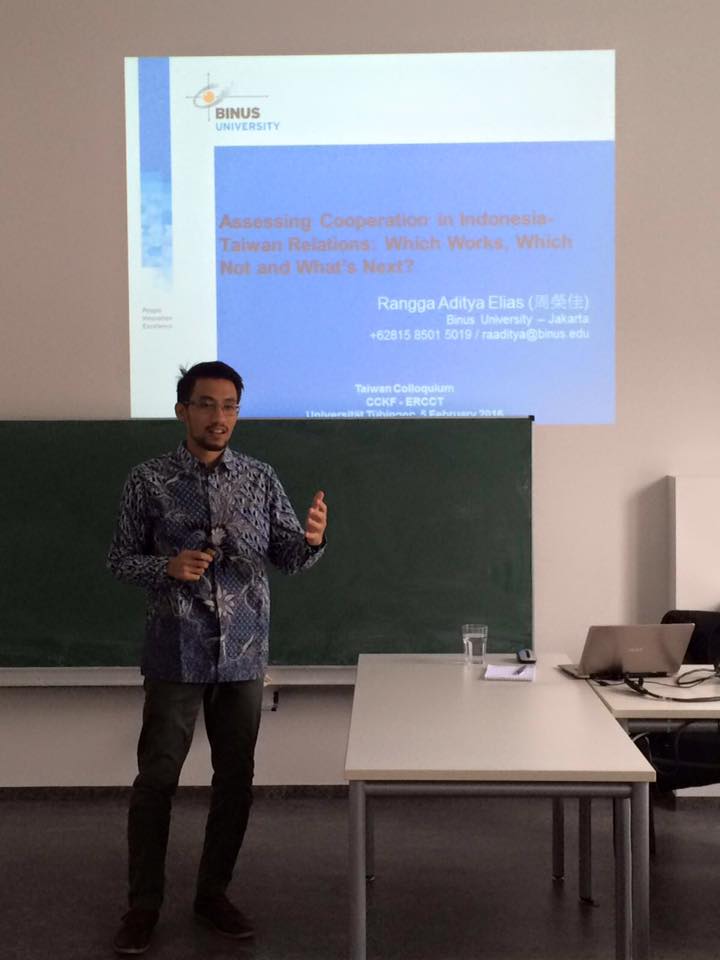 Despite the absence of diplomatic relation, Indonesia and Taiwan have successfully nurtured cooperation in various fields. The role of “de-facto institution” (DFI)in Indonesia-Taiwan relation is crucial as it allows both parties to increase government’s interaction, hence produces more substantial cooperation, said Rangga Aditya a lecturer from IR Department Binus University during his talk in Taiwan Colloquium at University of Tubingen, Germany. In the early stage, there was only Chamber of Commerce from Indonesia and Taiwan to facilitate communication and interaction between two governments. During that period, six cooperation in three different fields were concluded between both sides. In October 1989, Indonesia gave permission to Taiwan to upgrade the officialdom of itschamber of commerce into Taipei Economic and Trade Office (TETO). Reciprocal action was taken by Indonesia in January 1995 by upgrading its office into Indonesia Economic and Trade Office to Taipei (IETO).Since then, Indonesia-Taiwan concluded ten more cooperation in eight different fields. Therefore, an assessment to examine the correlation between the increments of cooperation and how it affects to increase interaction of both governments is necessary.

Aiming to respond the aforementioned condition, Rangga who was invited as the visiting fellow at The European Research Center on Contemporary Taiwan, University Tubingen, delivered three conditions that may allow greater impact in the Indonesia-Taiwan relation.First, TETO has more authority and more general objective which enables TETO to cover extensive issues; while IETO has more limited authority and objective. Thus, the consideration about the objectives and common concern has to be taken into account in IETO sides. Second, the involvement of DFI in every phase of cooperation has made the process work better due to their experience in working and interacting together instead of only triggering the cooperation and signatory executor. Third, with IETO limited authorities, it is important to consider cooperation where IETO has the structure to cover such cooperation. Absence of structure to cover particular issue proves the cooperation will not succeed to increase the government interaction.