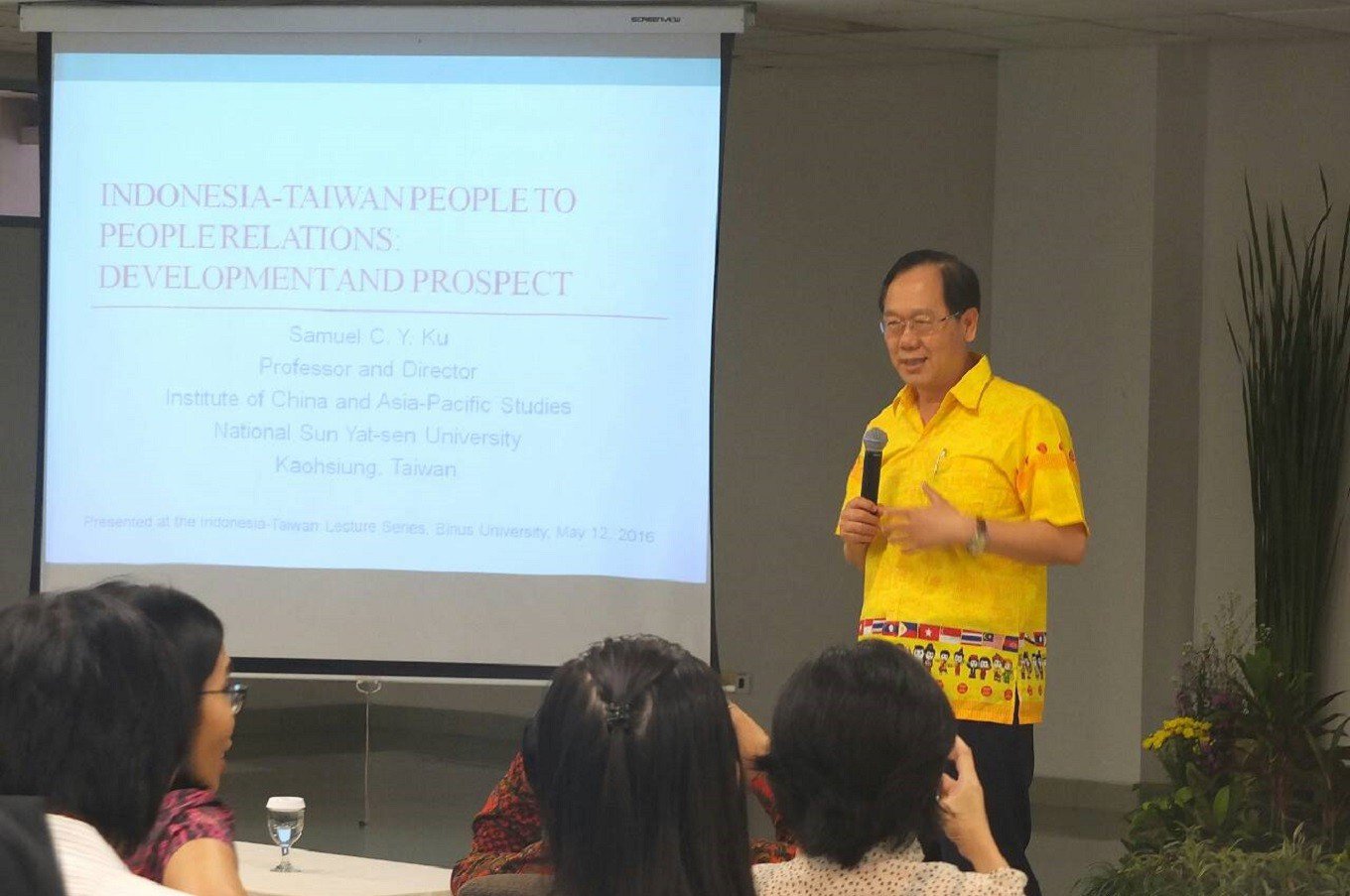 In response to the lack of Taiwan studies in Indonesia, Department of International Relations Binus University in association with Chiang Ching-kuo Foundation are organizing a workshop on Cross-Strait Relations Interactions: Indonesia – Taiwan that are consisting of 6 (six) lectures and will be conducted on April through May 2016. The focus of the lectures will involve around variety of topics, such as politics, economics, security, technology transfer, and people-to-people relations. This event also strives for developing an extensive academic discourse of Taiwan in Indonesia and ultimately increasing mutual understanding between Indonesia and Taiwan.

On 16 May 2016, the second lecture (out of six) was held in Binus University Anggrek Campus inviting Professor Samuel Ku from National Sun YatSen University, Taiwan. The second lecture focuses mainly on the people to people relations between Indonesia and Taiwan.

The event began with the opening speech by Prof. TirtaMursitama, Head of Department of IR Binus, acknowledging the close relations between IR Department of Binus University and National Sun YatSen University, Taiwan, especially Professor Ku. The two universities have conducted joint events previously. This event highly welcomes Professor Ku as he can be considered as one of the experts of Indonesia – Taiwan relations.

Next, the lecture by Professor Ku commenced with brief explanation about the theoretical foundation that includes soft power, Smart Power (the use of both soft and hard power equally), values-oriented diplomacy, and neo-functionalism. These theoretical foundations are seen as the important values of human beings and civilian interactions as they are the foundation of cross-border relations. People to people relations among countries can be indicated by several factors, both materially and ideally. Material indicators include tourism, trade, investment, migrant workders, etc. While interactions that cover issues in democracy, human rights, etc can be considered as the ideal indicators. According to Professor Ku, between Indonesia and Taiwan, although no diplomatic relations exists, both sides have been able to maintain a stable relations, and have continued to enhance it in other aspects.

Moreover, Professor Ku explained that the prospects in trade, investment and tourism between the two sides are good, which means both can benefit from its relations.

Audience enthusiasm’s was reflected from the questions raised following the lecture. One of the questions came from a student from International Relations Department Binus University asking that if students have become the actor of the people to people relations between Indonesia and Taiwan, how can the interactions by among the students contribute to the people to people relations between the two sides. Apart from the already existing PersatuanPelajar Indonesia in Taiwan that has been playing such an important role in building the people to people relations between the two sides, Professor Ku gave an explanation that students certainly can contribute by many ways, for example creating a networking group of Indonesian students alumni of Taiwan universities in which information can be exchanged in the group.

Following the Q&A sessions, the lecture was closed by the lunch together. The next 4 (four) lectures will be conducted on 16 May (on Economic Relations), 18 May (on Taiwan’s Soft Power Influence in South East Asia), 25 May (Security Relations), and 26 May (on Technology Cooperation and Collaboration). The lectures invite prominent speakers whose expertise align with the topics. The lectures take place in Exhibition Hall, Anggrek Campus, Binus University.

The 2nd Indonesia–Taiwan Lecture Series is also covered by The Jakarta Post as can be seen at the following link: