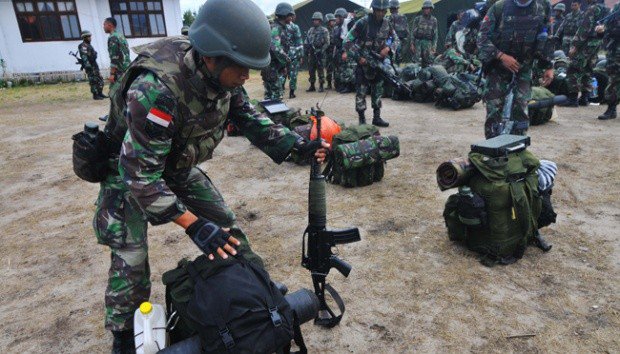 One of the Faculty Members of the Department of International Relations at Bina Nusantara University, Tangguh Chairil, published an opinion article titled “Military in counterterrorism: Restraining collateral damage”. The article is as follows.

The House of Representatives’ special committee set up to amend the Terrorism Law is considering granting counterterrorism enforcement powers to the Indonesian Military (TNI). Such authorization could lead to a predicament.

The TNI has played a crucial role in the joint operation to capture Indonesia’s most wanted terrorist, Santoso, and his followers in the Central Sulawesi regency of Poso. TNI soldiers shot Santoso dead in an exchange of fire recently, ending a manhunt that lasted for years.

In his press statement TNI Commander Gen. Gatot Nurmantyo argued that terrorism was “not an ordinary crime, but a crime against the state”, which therefore required a change in approach that prioritizes early detection and preventive measures.

Gatot cited the theory of Israeli counterterrorism expert Boaz Ganor, according to which criminal law is not sufficient to address terrorism, because it is designed to organize daily life.

By contrast, according to Ganor’s way of thinking, the law of warfare is more suitable for combating terrorism, because methods of military operations are often required in counterterrorism.

What Gatot fails to explain is that Ganor’s theory actually presents a series of dilemmas around how the state should respond to terrorist activities. One of them concerns the dominance of a military component in counterterrorism policy: Military means against terrorist organizations may be effective, but they could also induce the terrorists to escalate and exacerbate their actions.

The success of military actions in damaging the terrorists’ ability to perpetrate attacks will only increase their motivation to commit acts of terror. All the more so when offensive actions are taken against terrorist activists or facilities. On the other hand, if no actions are taken in retaliation for a terrorist attack, the terrorists will have little incentive to preempt/stop such attacks. Ganor calls this dilemma the “boomerang effect”.

The “boomerang effect”, I will argue, is present in the context of terrorism in Indonesia. Prior to 2011, the targets of terrorist attacks in this country were mostly places of foreign, Western interests and residents. Since then, the attacks seem to have shifted to targeting authorities, especially police officers.

This phenomenon shows that terrorist organizations are retaliating against the police for arresting and killing their members. Indeed, counterterrorism squad Detachment 88 (Densus 88) — which has had considerable success in disrupting terrorist deployment and operations throughout the country — is part of the National Police.

Densus 88 has been accused of excessive use of force and human rights violations in counterterror operations and of torture against people in custody. Their methods have not only infuriated terrorists but also raised concerns among the Muslim population, who link the war on terrorism with an attack on Islam as well as human rights groups.

If the police — whose use of physical force is normally limited to low-level, non-lethal engagement — often resort to deadly force when facing terrorists, then what sort of expectation is to be put on military personnel — whose training is to eliminate the enemy in the most effective combat manner possible?

The “boomerang effect” is part of the collateral damage of counterterrorism in the war model, where the emphasis on restraining terrorism is stronger than on maintaining liberal democratic rights.

The war model in counterterrorism employs the exercise of military force and strategies with the intention of eradicating terrorism as dictated by the law of warfare, while consequently any constitutional or legal consideration is solely secondary. The armed forces’ response to terrorism is guided by military doctrine, whose nature often falls outside of acceptable democratic standards.

On the other hand, even the most democratic states with commitment to civil liberties, national and international law are vulnerable to perversion by terrorist organizations that bait the states into causing collateral damage among the civilian population. The terrorists could exploit civilian casualties as supposed proof of the immorality of the state.

Restraining collateral damage, therefore, must be the number one priority before involving the TNI in counterterrorism.

Only when that requirement is fulfilled may the TNI be called in for specific military roles in counterterrorism, such as military support to civil authorities, preventive operations, interception of terrorists and arms shipments, hostage rescue, intelligence gathering, preemptive intervention, targeted strikes and retaliatory raids.

As a precautionary measure, every involvement of the TNI must be treated as an integrated part of the overall counterterrorism strategy. In this context, TNI elements as well as National Police elements must be placed under the operational control of the Indonesian National Counterterrorism Agency (BNPT) as counterterrorism coordinator.

BNPT needs to ensure synergy between Densus 88 and the TNI’s elite forces, such as Denjaka, Sat-81/Gultor, and Satbravo-90, to avoid overlapping engagement: Densus 88 carries out normal counterterrorism operations, and when the threat escalates into a matter of national security, then the TNI’s special forces are deployed. This should be clarified in the form of a government regulation.

Involvement of the military in counterterrorism is inevitable. However, to restrain collateral damage to civilians, there must be strict regulations to the military means in the war on terrorism concerning the circumstances, conditions, degree and manner in which the use of force may be applied.