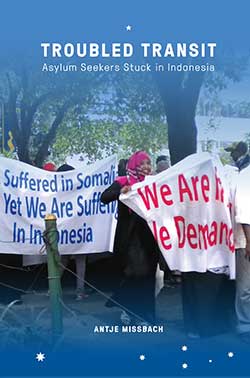 One of the Faculty Members of the Department of International Relations at Bina Nusantara University, Wayne Palmer, published a review of a book titled Troubled Transit: Asylum Seekers Stuck in Indonesia by Antje Missbach, published in 2015 by ISEAS – Yusof Ishak Institute. The book review is as follows.

Troubled Transit makes a welcomed contribution to knowledge about the experiences of asylum seekers in Indonesia while they wait for the opportunity to settle in a third country. Antje Missbach was motivated to study this problem by the Australian view that they are a people to be pitied and a security concern. At the same time, she noted that the view was also generally uninformed about what life in transit is like. She works hard to give a balanced take of the situation through the use of often conflicting perspectives from both asylum seekers and policy-makers. Central arguments are that transit migration is a time-intensive process and that asylum seekers’ lives are complicated in transit countries like Indonesia, which proscribe integration and where the international protection system does not provide durable alternatives for resettlement.

Missbach reframes Indonesia’s asylum seekers as migrants in transit, who have arrived in the country with the express purpose of moving on to another. She argues that this intention is key because asylum seekers have become ‘stuck’, as the duration of their stay is sometimes much longer than planned and the outcome of their entire journey uncertain. Integration is not a legal option in Indonesia so settlement in a third country is the most sought after solution to their predicament. In other words, the international protection system is the ongoing method of choice for extricating themselves from it.

The positioning of transit migrants as recipients of services rather than rights-holders in the Indonesian context is another useful contribution to better understanding the combination of policies required to respond appropriately to their situation. Inter-governmental agencies, especially the UNHCR and IOM, are tasked with the responsibility of providing transit migrants with all possible support given the Indonesian context as part of an attempt to improve their economic and social standing. Missbach observes that the assistance is a form of ‘semi-protection’ that does indeed support transit migrants but also re-affirms the perception that the group has no urgent need for legal rights.

Missbach offers a detailed case study of transit migration in one country to academic debates on irregular migration. The concept is often linked with illegal means for crossing borders, for example, in countries within the European Union. Indeed, Indonesia’s transit migrants have in someway broken immigration law, and Troubled Transit acknowledges this. But without focussing on their irregular migration status as part of an attempt to reinvigorate the concept as a tool of analysis, Missbach skillfully applies transit migration to examine the asylum seekers’ lived experience only.

This book will be a useful resource for rights advocacy groups. It is less likely to find favour with policy-makers, who remain convinced that they have struck a reasonable balance between the treatment of transit migrants and security concerns. Missbach attempted to accommodate this standpoint in the chapters that provide a perspective from above on the ‘semi-protection’ services provided to transit migrants. It also acknowledges the security concerns that transit migrants generate in Indonesia and neighbouring countries like Australia. But as Missbach argues, however, it is very difficult to justify the injustice and suffering incurred as a result of the limitations of the international system. This book is an important guide to the consequences of this failure.

Troubled Transit, then, should be mandatory reading for those interested in learning about the hardships transit migrants in Indonesia go through before they arrive in a third country. Missbach showed how life in transit is characterized by ‘poverty, insufficient protection, unemployment and social exclusion’ (p.18). Any ongoing response to this situation should seek to mitigate and remedy these excesses while keeping in mind evidence-based conclusions about security concerns. An attempt to balance these two legitimate endeavours does not always have to be a zero sum game.