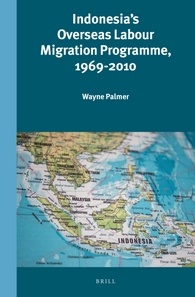 One of the Faculty Members of the Department of International Relations of Bina Nusantara University, Wayne Palmer, recently authored a book titled Indonesia’s Overseas Labour Migration Programme, 1969-2010 published by Brill. The book was reviewed by Antje Missbach and the review was published in Journal of Current Southeast Asian Affairs 35(3), 187-190. The book review is as follows.

Palmer’s detailed analysis of the involvement of Indonesian state agencies in international labour migration fills a long-standing research gap. A multitude of academic studies have produced intimate insights into the exploitation of Indonesian migrant workers across the globe; however, there has not yet been any investigation of the role of the bureaucracy and state administration in allowing exploitation by recruiters and employers, as well as by their own officials and representatives, to take place. Palmer’s account condenses eight years of intense work, primarily interviews with bureaucrats, migrants and recruiters, but also sifting through a mass of national legislation and local regulations, into a very readable book. It offers a unique insight into the mechanisms of the Indonesian state apparatus, not only at the national level, but also at six selected regional migration hotspots (Surabaya, Semarang, Tanjung Pinang, Nunukan, Medan and Jakarta) and at three Indonesian embassies (Hong Kong, Singapore and Kuala Lumpur). Overall, it is a logically structured and well-composed book.

Considerations of discretion and illegality provide the book with a theoretical frame. However, rather than just detecting and describing illegal state practices, Palmer is interested in offering rationales for why and under what circumstances discretion is applied. Discretionary practices are not necessarily employed only for the selfish purposes and selfenrichment of individual state officials, but also occasionally as a “quick fix” for the wider organisations. Discretion can keep the basic system functioning, particularly at times of administrative chaos and legal and institutional uncertainty; as Palmer puts it: “discretion can and does play a vital role in lubricating the modern state machinery, especially when the state’s formal structures are somehow deficient” (p. 18).

Indonesia’s state-organised labour migration programme is more than 40 years old and has undergone substantial legal and institutional change. From the late 1960s onwards, the migration of Indonesian labour was deemed a necessary part of Indonesia’s vision for greater economic development. Not only did many Indonesians lack well-paid employment options in their home country but labour migration was also seen as an important option for generating foreign exchange revenue, particularly during the oil crisis when Indonesia’s oil and gas revenues dropped. Although labour migration was not entirely new to Indonesians, some of whom had gone abroad to find work in places such as Saudi Arabia, there had been little registration or regularisation of this mobility until the 1960s. It was then found that regularisation offered the state a lucrative source of income, from the sale of exit permits, arrangement of health checks and creation of insurance schemes. Naturally, companies already involved in international trade activities became obvious partners for the Indonesian government in recruiting and sending labourers, as they had the necessary contacts and know-how. During the New Order, state policies issued by the Ministry of Manpower introduced a system of intermediaries within labour recruitment schemes that maximised profits for recruiters, and for the state that licensed those recruiters, but broadly neglected the basic rights of labour migrants. Recruitment costs were imposed on the potential migrants rather than the employers. On top of these costs, the Ministry required potential labour migrants to pay for many substandard or outright useless services. As the numbers of labour migrants grew substantially, the Ministry relied increasingly on recruitment organisations for administrative tasks and for intervention in complicated problems, such as non-payment of wages. The more players became involved, the more legal and extra-legal payments could be extracted from the migrant workers. Throughout the book, Palmer offers vivid illustrations of how greedy bureaucrats enriched themselves on the backs of labour migrants.

The end of the New Order did not bring immediate change to stateoperated overseas labour migration programs and the highly lucrative monopoly stayed in place for many more years. It was not until 2004, when Law 39/2004 on Placement and Protection of Indonesian Workers Abroad was implemented, that some of the worst excesses of labour recruitment were criminalised. The impetus for this law came from President Megawati, who had made the better protection of labour migrants part of her re-election campaign, although this had not been enough to reinstate her as head of state. Nevertheless, in post-New-Order Indonesia, the old networks of the Ministry of Manpower were eventually disrupted and the old patron–client relations of labour recruitment schemes became more diversified, thanks to decentralisation efforts. Because of the Ministry’s systemic failure to address many shortcomings, in 2007 the government put in place a purpose-built Agency for the Placement and Protection of Overseas Indonesian Workers (BNP2TKI). While policymaking remained the domain of the Ministry of Manpower, the BNP2TKI was granted authority over operational aspects of recruitment programs, such as monitoring of training. Despite many good intentions to overcome the Ministry’s inherent conflict of interest, the textbook division of task-sharing failed dismally. Rivalry between the Ministry and the BNP2TKI caused considerable chaos, which not only negatively affected the state’s development plans but also had damaging effects on labour migrants.

Chapter One offers the theoretical background on internal state politics and state administration, and Chapter Two provides an historical overview of state-organised labour migration schemes in Indonesia. The main focus of Chapter Three is on how the conflict between the Ministry of Manpower and BNP2TKI played out in detail. Palmer provides very telling examples of how both sides tried to protect their stakes in that rivalry and of the dirty games some bureaucrats played to discredit their competitors. The fascinating depiction of lust for power, ambition, coercion and the complicated tensions between law and institutions provides the reader with a solid understanding of the complexities of this particular part of the Indonesian state apparatus. Whereas illegal practices and misdeeds occurring within institutions are usually blamed on individuals (oknum) and their lack of communal responsibility, Palmer supports an understanding of institutional discretion, which is not a failure of individuals to obey the law, but rather a widely-applied pattern and systematic form of governance in which many bureaucrats do not use the law to prescribe what to do, but rather use it to justify what they want to do (p. 65). More often than not, what they want to do is foster their own private goals and advance their own careers, although they occasionally also intend to provide the service required by the beneficiaries.

Law and institutions are the major components of modern states but it is only their successful implementation and operation that can show that a state is functioning well. In Chapter Four Palmer sets out to illustrate the challenges of enforcing contradictory regulations in a “decentralised unitary state” such as Indonesia nowadays. Because of the ongoing rivalry between the Ministry of Manpower and BNP2TKI over who was in charge of issuing certain papers and thereby earning certain revenues, Palmer visited six hotspots that serve as major embarkation and return/deportation sites for overseas labour migrants. His intention was to determine the consequences of the inter-institutional rivalry at the sub-state level and to find out how subnational administrations in different areas dealt with the dilemma of whether to follow instructions from the Ministry or from the BNP2TKI. His findings show that there was no uniform way in which the subnational administrations reacted to this challenge, as each adjusted in a different way. This finding in itself shows how important it is to take into account the complexity of administration and governance in contemporary Indonesia, which consists of more autonomous places than under the New Order.

Chapter Five directs attention to three overseas embassies and their involvement in labour migration issues. Although the labour attachés at the embassies were more removed from the intra-institutional conflict, the uncertainty in Indonesia translated into a vacuum overseas and to increased discretionary forms of problem-solving by the attachés posted overseas to assist migrant workers and provide them with better services. Once again, the assemblage of detailed observation and information secured from the author’s interviews and informal chats is impressive. It not only shows Palmer’s long-term engagement with certain actors in the field but also his skill in extracting sensitive information from those he spoke with. He never presents his insights in a demeaning or judgemental way, but imparts some of them through finely tuned humorous anecdotes from the field, thus helping the reader to digest the sad realities analysed so thoughtfully in this book.

Antje Missbach
Dr Antje Missbach is a senior research fellow in anthropology at the School of Social Sciences, Monash University, Clayton Campus, Australia. Her current research focuses on people smuggling and involuntary immobility of asylum seekers and refugees in Indonesia. Her latest publications include Troubled Transit: Asylum Seekers Stuck in Indonesia (2015) and Linking People: Connections and Encounters between Australians and Indonesians (edited with Jemma Purdey, 2015). <antje.missbach@monash.edu>