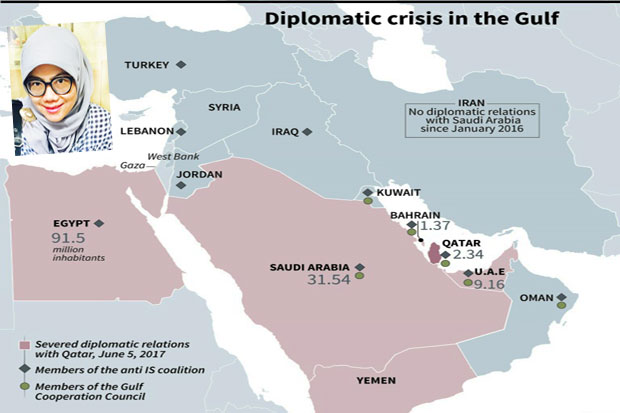 One of the Faculty Members of the Department of International Relations at Bina Nusantara University, Tia Mariatul Kibtiah, published an article titled “Pure Just Business Competition Issues”. The article is as follows.

The severance of Saudi diplomatic relations against Qatar was shocking. The reason, Qatar is a permanent ally of Saudi Arabia in Arabian Peninsula. Qatar includes a country that is very loyal to Arabia.

For example, when the Saudis cut off diplomatic ties with Iran because the case of Shia cleric Sheikh Nimr-al-Nimr was executed in Saudi Arabia, Qatar was a country involved in the severance of diplomatic relations.

In the Yemeni conflict between the Houthi-Yemeni Government, Qatar participated in sending troops to Yemen and joining Saudi forces to attack the Houthis. The business relationship of Qatar-Arabia also can not be ignored. For example oil cooperation, food exports, raw materials and so on.

Of course this decision will affect the regional political stability of the Gulf countries (Yemen, Bahrain, United Arab Emirates, Oman, Kuwait including Qatar). Their geographical location is close together and interdependent in almost all sectors. Saudis decided to closed the border, halted air and sea traffic with Qatar.

This condition is increasingly complicated by the following Gulf Countries Bahrain, UAE, Egypt and Yemen to sever diplomatic relations with Qatar.

The Saudis accuse Qatar of supporting terrorist organizations such as ISIS and al-Qaeda in the Middle East including Hezbollah in Lebanon. In fact, it is known that Saudi Arabia supports the Assad opposition in Syria which is one of them is ISIS.

The accusations are actually more to Saudi fears over improved Qatar-Iran bilateral ties. Iran and Qatar are cooperating in the oil field, namely North Field (North Qatar) and South Pars (Southern Iran). The field is 97,000 m2 in Qatar Waters. From the field oil, Qatar extracted three times more than Iran. It is estimated that Qatar’s revenue because the field reached 37 billion dollars. The decision of Qatar is right.

As world oil prices slump, and a strong Saudi coalition is also struggling, Qatar continues to build its economic growth through cooperation with various countries, including Iran. In some of Qatar’s media, Emir Qatar Tamim bin Hammad Al-Tsani often praises Iran as a strong country in the Middle East.

Even the Emir informed has said that Trump’s visit to Arabia some time ago, was positioned Qatar is supporting the world terrorist movement. The Saudis do not tolerate this. The Saudis hope that all its allies are not betrayed and no one is cooperating with Iran.