Discourse – Feminism in International Relations: Voices from the Margin? (1 of 2) 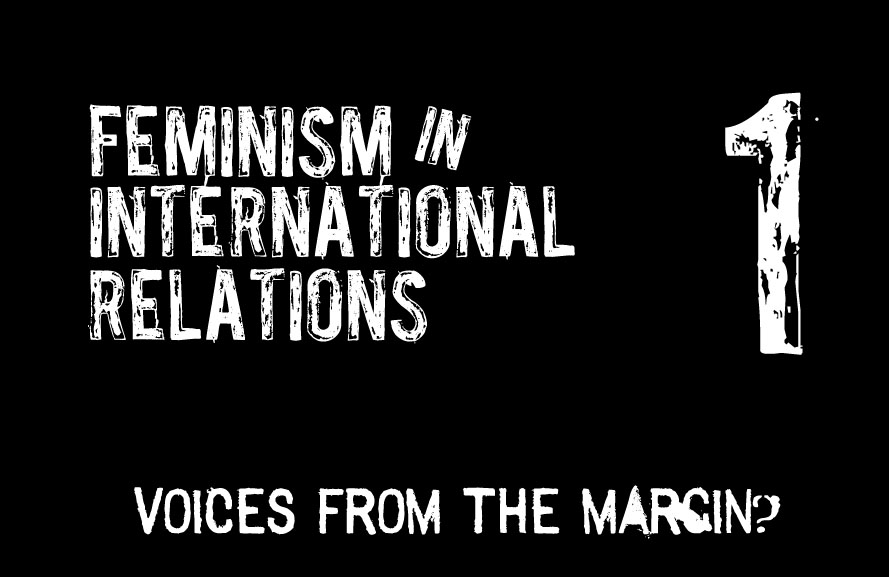 “International Relations is a man’s world,” (Tickner, 1988, p. 1). This statement has been echoed – albeit in different forms and variations – by other scholars and writers but somehow has not been able to do much against the status quo (Zalewski, 2007). It is indeed undeniable that within the past decades, “non-traditional” security issues such as those related to gender has gained more traction, the validity of Feminism within the study of international politics however have continuously been questioned, ultimately causing gender sensitive theoretical perspectives  to be within the margins of the discipline, while in occasions left out of the whole discussion altogether (Tickner, 1997; Zalewski, 2007).

There has indeed been various criticism aimed towards feminism within the discipline of International Relations. Certain experts have argued against feminism’s inability to be coherent as well as its failure to predict in the manner that most “mainstream” International Relations theories do (Wiegman, 1999; Zalewski, 2007). Indictment from within has accused feminism of losing its critical edge; of ironically being a contributor to women’s suffering; and most importantly of being an ineffective tool of gender analysis (Caprioli, 2004; Zalewski, 2007). Thus the haunting echo of “the death of feminism” has gotten louder as it seemed to fail in bringing the transformation it promised within International Relations.

Feminism however, defended by claiming that there exists not the need for a single standard of “methodological correctness” of doing research (Tickner, 2006). This can be said to root from their epistemological standpoint that is skeptical of objective and universal knowledge. Thus, their accused inability to predict in this regard can be defended as something that feminism never intended to do as they are inherently skeptical against positivist mode of knowledge (Tickner, 2006).

This engagement between feminism and the rest of the “mainstream” International Relations [IR] have left the rest of us questioning the aftermath: the marginalization of feminism and the sustained prominence of the rest of “mainstream” International Relations theoretical perspectives, for example realism and neo- liberalism as well as their respective variance. This discourse argues that there are two reasons for this outcome. The first reason concerns the nature of feminism and the discipline of IR itself. Feminism itself as an inherently critical theoretical perspective is incompatible with the foundations in which the knowledge in IR was fundamentally built upon. Feminist literatures have long argued that that enlightenment knowledge is gendered, which consequently means that those constructed out of that very mode are also inherently gendered (Tickner, 1997; Zalewski, 2007). IR theorists, following the established tradition, have a rooted belief in the notion of objectivity, which can be seen in influential texts such as that of Morgenthau’s (Tickner, 1988). The second can be found in the hegemony of the “mainstream” theoretical perspective. The argument here is that the hegemony of these “mainstream” perspectives shaped what and how IR should be studied and thus what should be said within it.

This discourse will present both argued factors not as something that is inherently separate, instead presenting the two as something that is inherently interconnected. In this regard, the marginalization of feminism within IR is continuously reinforced and reproduced through the sustained hegemony of the “mainstream” IR theoretical perspective. This discourse would go in the following order: first, it will present an exposition on the fundamental differences between feminism and the rest of the “mainstream” IR, which indicates a rather large difference; second, it would discuss the hegemony of the “mainstream” IR theoretical perspective and along with that see how it allowed for certain agendas to be elevated in comparison to other; and the third section would provide a conclusion to the discourse.

In more than few occasions, feminism and International Relation have had issues in terms of compatibility (Whitworth, 2008). Where feminism sprouted from social activism and critique, International Relations grew as a discipline that mainly serves the policy necessity of governments. As there are different aims and goals that feminist activism tried to achieve – such as those related to anti-colonialism, disarmament, and reproductive freedom – it allowed for different strands of feminism with different sets of theories and methodological preferences to exist. Tickner argued that feminism claim no single methodological “correctness” or a single way in which a certain research can be done (Tickner, 2006)The reason for this comes from their view of research as a “knowledge-building” that comes “through conversation with texts, research subjects, or data,” (Reinharz & Davidman, 1992, p. 230; Tickner, 2006, p. 23). This is in contrast with the rest of International Relations which usually prefers a prior methodological commitment.

There have been more than few criticisms that sprouted from this methodological standpoint. Some have criticized feminism to be incoherent due to its extremely diverse range of variants (Zalewski, 2007). Some have criticized feminism on a rather basic and somewhat typical form, which was elegantly put forward in the title of an article by Tickner: “What Is Your Research Program?” (Tickner, 2005). One could see that on the surface, methodological issue may be the cause of the great rift between feminism and the rest of IR. However, one could also see that behind the curtain of methodology, there exist different sets of realities that separated the two that caused an even greater rift.

Feminism can be argued as existing in a different set of reality than the more “mainstream” IR counterparts. If we indeed take the stance that argues that the “mainstream” theories of IR have been built out of positivist tradition, then this can be the starting point in which the divergence can be analyzed. Positivist epistemology was built on “facts” and along with it, the notion of objectivity. If indeed every epistemology contains the triad assumption of knower, the known, and the process of knowing (Genova, 1983), then positivism enforces the dichotomy between the knower and the known for the purpose of gaining objective knowledge (Sprague & Kobrynowicz, 2006). This is in contrast with feminism’s standpoint epistemology. They believe that each subject is specific to a certain time and location, and thus the knower possesses a particular perspective and position on the subject (Genova, 1983). In this regard, knowledge acquired by a knower would not be complete or objective but rather partial. This allowed a certain position to be privileged in the process of knowledge-building in terms of an understanding. Where Marxism generally privilege the working class, feminism privileges the position of female and other oppressed group of people (Sprague & Kobrynowicz, 2006). This allowed for the argument that feminism prefers for more humanistic methodologies, which is in complete opposition with the “mainstream” IR perspectives (Tickner, 1997).

Robert Cox asserted that theories are always for someone and for some purpose (Cox, 1981). In this sense, feminism can be said to be in agreement with this critical assertion as it fundamentally questions the current establishment and how it came about (Cox, 1981; Tickner, 1997). Robert Cox’s distinction between traditional and critical theories can be used as a rationale for feminism’s contradictory epistemological position against positivism and consequently the rest of the “mainstream” IR. It was argued that where problem-solving theories take the world as it is and thus accepts the current prevailing order, building themselves from that very framework; critical theory questions and challenge that very order. In this regard, feminist theorists see the current order as characterized by gender hierarchy and thus it is unlikely for them to pick an epistemological stance that simply accepts such structure. This in turn can be seen as a rationale for why feminism has long been critical towards positivist mode of knowledge.

Feminism has long argued that knowledge is inherently gendered. Longino (1981) has argued that within western philosophy, masculinity and objectivity has always been in constant association. She fundamentally argues that objectivity is the result of masculine psychic that needed to detach from what was alleged to be feminine subjectivity. This echoes the assertion by Keller (1985) in which she argued that Enlightenment science – that emphasized heavily on the notion of objectivity and rationality – has incorporated within a system of belief that equates objectivity with masculinity and with that a value system that elevates those that are considered as masculine and scientific. She argued further that throughout the history of modern west, men has always been seen as the knowers and that what is considered as legitimate within natural or social science has source in the lives of men in the public sphere. The established dichotomies within the foundation of Enlightenment science such as rational/irrational, facts/value, or public/private allowed for the separation between the mind and the body, which then lower the legitimacy of women as knowers (Tickner, 1997).

In short, what was written in this section fundamentally speaks about the great rift in realities between feminism and the rest of “mainstream” IR. Where the “mainstream” perspectives live in a world defined by objectivity and explicable through positivist methodologies, feminism challenged the very notion of objectivity and thus the possibilities of knowing through the wide-accepted positivist methodologies. This is reason why feminism tend to ask different sets of questions from the “mainstream” IR as the task of feminist theories, as argued by Sandra Harding is “to make strange what has previously appeared familiar, or to challenge us to question what has hitherto appeared as “natural,”(Harding, 1991, p. 123; Tickner, 1997). Within the discipline of International Relations, these have come in the form of challenge towards the wide accepted paradigms such as the gender neutrality of the state or the legitimacy in the concept of war and security.

If indeed we have seen the fundamental differences between feminism and the rest of the “mainstream” IR, then another question can be legitimately raised. The question of why and how feminism remains uncomfortably within the margin of the discipline has yet to be addressed. This discourse shall now address this question, arguing that the marginal status of feminism can be rooted in the hegemony of the “mainstream” IR perspectives, which in turn elevates certain kinds of theorizing in comparison to other.