No, They Will Not Be Silenced: #MeToo Activism in China 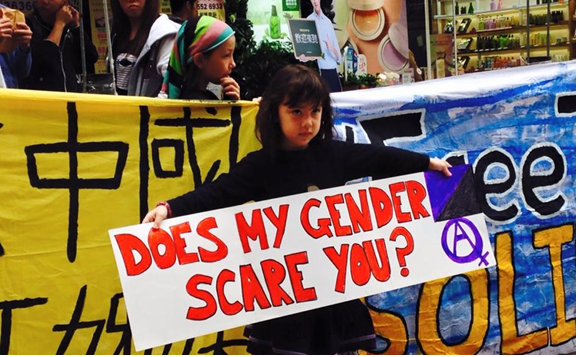 “We live in a world of patriarchy”, a sentence that is true, but is denied by the majority. Of course, this would not be recognized in this world where power and authority are mostly handled by men who feels that their positions are being threatened by women. Many men and even the occasional women had launched arguments such as “men and women are different simply because of their biological traits thus the domination of men is natural” and that “women are not being oppressed as men also face the same situation” to state that there is no problem with the current system. Only a certain percentage has realized and criticized this, and those who do are usually called feminists.

The phrase “An ideal woman is one that is …” had been continuously used by many, regardless of their genders, serving as a guideline as to how women should act. For many centuries this had affected women in many parts of the world, however, they had simply accepted the situation. No matter where it is nor whatever their culture is, they all have similar key points – women must fulfill the criteria to be considered worthy. In addition to these, unlike men who need not fear of being looked down due to impurities women had to protect their chastity in order to defend their family honor. This norm eventually leads to women being discriminated as they cannot speak out if they fell victim to rape and sexual harassment since if they do, they will only further damage their own reputation (identity). Many rape and sexual harassment cases had put women on the blame, basing their arguments on how “boys will be boys” and saying that it is actually expected if men were to do those sexual assaults. It was not until the 19th century that feminism rose to advocate gender equality. Beginning with the women’s suffrage movements that is the first wave the movements continued and went through the second and third waves in the 20th century. In present time, the 21st century marked the fourth wave of feminism that is mostly done online, one form of this is the #MeToo movement that begun in 2011-2012. First used by an activist, Tarana Burke, the phrase Me Too was popularized by Alyssa Milano and became a worldwide movement to address sexual violence as a problem. Amongst the states that joined in the movement China was one of them.

Similar to other cultures, traditional Chinese beliefs sets up the Chinese gender roles for many centuries that it had stuck to the modern society. The concept of Yin and Yang that originated from Taoism held the meaning that the co-existence of men and women was natural and both are equally important as their balance is needed to achieve harmony. However, in spite of the same significance, Yin and Yang are symbolized as having contrasting values. Yin is seen as the passive, soft, feminine value and is often symbolized as the earth. Whilst Yang on the other hand is seen as the hard, active, masculine quality and is symbolized by the heavens. As women were symbolized as Yin and the men as Yang, women were considered to have lower qualities and thus they were judged to be lower than men in the hierarchy. The gender roles were further affected by Chinese traditional literature such as I Ching and The Book of Rites. The I Ching had noted that ‘Great Righteousness is shown in that man and woman occupy their correct places; the relative positions of Heaven and Earth’. The Book of Rites, had similar points as the I Ching and emphasized that women were to submit and may not be involved in public affairs. Aside from those two, there were also several literatures made by women like Precepts for Women and Classic for Girls. These two books were instructions made by women for women on how they should act, the former encouraged women to be more submissive towards their husbands as “they are the Heaven”, the latter on the other hand suggested ideal qualities of women that is known as “The Three Obediences” and “The Four Virtues”. The values of these writings had become the fundamentals of traditional gender roles and thus became the norms in traditional China.

It was not until the late 19th century that women began to strive for gender equality. The road was very rocky though especially with many of the men being chauvinist. Yet, they did not stop and demanded for a change so that women can participate in politics. Their situation changed significantly when the Communist Revolution signaled the approval of women suffrage which had resulted in the increasing activity of women’s right groups. Support became stronger especially with Mao Zedong’s proclamation that stated“Women hold up half the sky”, indicating that the chairman himself is an ally to feminists in China. The following years in the 21st century was a series of pro-feminist developments. 2001 marked the amendment of Chinese marriage laws which was prior to that had not included abuse as a ground for divorce, 2005 signaled the outlaw of sexual harassment, these events continued up until now, the year of 2019, in which discrimination in workplaces are being banned. The tides have turned in their favor but there are still women in the modern China who still holds on to the old traditions. They are given two choices, standing up to defend their rights or sticking to old traditions.

After years of staying silent the women of China have begun to voice their rights, throughout the 19th and 20th century they demanded for more equal rights and now in the 21st century, the #MeToo Movements had become a platform for their activism. The #MeToo movement in China was slow, unlike other states, but it was there. This slow development is partly caused due to the government maintaining traditional gender norms, as author of “Betraying Big Brother: The Feminist Awakening in China,” Leta Hong Fincher described as, “There’s this huge confrontation now between the agenda of the government, which is pushing a very traditional gender norm”. The movement had attracted many women to participate, that is true. However, although many Chinese women were on board with the #MeToo movement their fight is still long from over as the government had not given support towards the movement.

Feminism in China is still seen as a threat by the government as they were seen to be disrupting the social order, causing several feminists to be prisoned. Cases of these can be seen through the events that happened to the Feminist Five who were arrested when they were simply trying to spread awareness on sexual violence by spreading stickers. This event, however, did not silenced the activists instead had brought more support from women who agrees with feminism. The activists had not given up on advocating the women’s rights there in China. As the #MeToo movement is mostly done online feminist themselves are at a slight disadvantage as medias in China are controlled by the government. Posts and articles on Chinese social medias such as Weibo and news are prone to be censored or at worst be taken down if it may affect or concerns the government. It led the activists to change methods on spreading the #MeToo movement in which they had changed the hashtag into #WoYeShi (Chinese for Me Too) and #MiTu, at the same time movement participants had also spread screenshots of victims’ sexual harassment stories, media investigations and commentaries, at times even posting the images upside down to confuse the filtering system. This will certainly be a high hurdle for the Chinese women, but if they are able to overcome that then it might even bring more developments that are in favor to them.

Cooper, R. A. (2013). TAO TE CHING: Classic of the Way and Virtue: an English Version With Commentary. Author House.

Olorunshola, Y. (2016, November 28). 10 Ridiculously Sexist Laws That Have No Place in the 21st Century. Retrieved June 31, 2019, from Global Citizen: https://www.globalcitizen.org/en/content/10-ridiculously-sexist-laws-you-wont-believe-still/

Sandberg, R. (2017). “You are not oppressed”: an argument analysis of anti-feminism on the internet. Retrieved from LUP Student Papers: http://lup.lub.lu.se/student-papers/record/8922783

The Guardian. (2016, June 1). Female genital mutilation is about misogyny and violence against women. Retrieved July 7, 2019, from The Guardian: https://www.theguardian.com/society/2016/jun/01/female-genital-mutilation-is-about-misogyny-and-violence-against-women

wbur. (2018, October 8). Feminism’s ‘Extraordinary Moment’ In China Right Now, And Why The Government Sees It As A Threat. Retrieved from wbur: https://www.wbur.org/hereandnow/2018/10/08/feminism-in-china