The Third Model AIPA 2019: Toward the Security, Secure, Stable and Prosperous ASEAN

Jakarta – On September 10-13, 2019, Himpunan Mahasiswa Hubungan Internasional (HIMHI) of Bina Nusantara University collaborated with Korps Mahasiswa Hubungan Internasional (KOMAHI) of Al Azhar University, for the third time held the Third Model AIPA with the theme “AIPA – Toward the Security, Secure, Stable and Prosperous ASEAN”. AIPA is an organization born of the desire of ASEAN Parliamentarians to create a mutual understanding in assisting and encouraging inter-parliamentary cooperation within ASEAN member countries.

It was originally formed on September 2nd, 1977 as the ASEAN Inter-Parliamentary Organization (AIPO) by the leaders of the parliamentary delegations of the Republic of Indonesia, Malaysia, the Philippines, Singapore and Thailand in the Third ASEAN Inter-Parliamentary Conference in Manila, Philippines. In 1995, Vietnam became a member, followed by Lao People’s Democratic Republic in 1997, Cambodia in 1999, and Brunei Darussalam in 2009.  In 2006, At the 27th AIPO General Assembly held in Cebu City, Philippines, there was a consensus to transform the organization into a more integrated institution and to change the organization’s name from AIPO to AIPA. 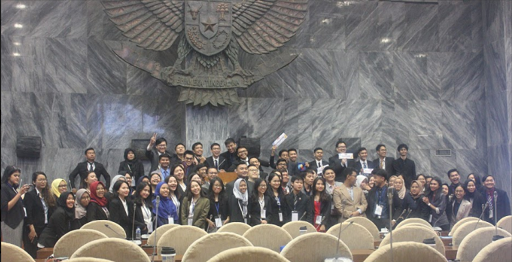 Responding to the less popular of ASEAN Community’s policies and to the importance of AIPA as one of communication forum among ASEAN member countries, the ASEAN Inter-Parliamentary Assembly has been launched The First Model AIPA in 2017 and The Second Model AIPA in 2018. This Model AIPA General Assembly and seminar about awareness and an educational program involving the participation of students of ASEAN member countries. The event features an educational simulation of the General Assembly (GA) of AIPA, where the participant will play roles as the official delegates of different AIPA member parliaments in a typical AIPA General Assembly. The first Model AIPA involved 70 students from universities around Jakarta area. The second Model AIPA in 2018, through cross-sectoral cooperation, were successfully gathered 73 university students from seven ASEAN member countries; Cambodia, Indonesia, Malaysia, Myanmar, Philippines, Singapore, and Vietnam.

There were three Chambers further enhanced in fruitful seminar and discussion through Model AIPA, i.e. Economic Chambers, covering topics “ASEAN Regulation on E-Commerce Cross-Border Taxes”; Politics Chamber with the topics “Principle of Non-Indifference to Prevent Atrocities in ASEAN: An Option of Violation of State’s Sovereignty?”; and Environmental Chamber, with the topics :Tackling Micro-Plastic and Marine Debris Problem: Should Plastics be Banned Completely?”. 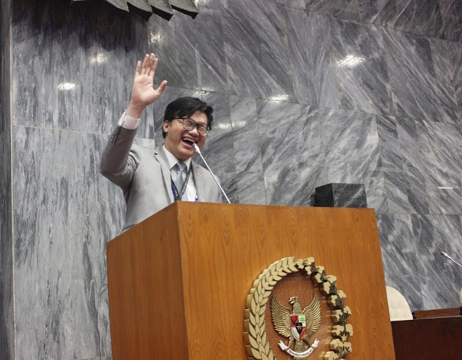 Economic growth is one of prior pillars in supporting ASEAN integration. By supporting the economic growth in the Region, E-commerce emerges to encourage ASEAN community to develop business domestically, regionally, and globally, mainly in the digital diplomacy. But, the application of e-commerce tax has not been applied in ASEAN. So the regulation of E-Commerce Cross-Border Taxes takes place as the prior discussion responding to this issue.

To be put into account, environmental awareness has become the world’s first prioritize as global warming knows no boundaries. In accordance to that, ASEAN should take a bold action upon the increasing number of marine plastic pollution. As plastic-Marine-Debris and Micro-Plastic is still ubiquitous and very difficult to decompose will promote threats to living creatures in the land and the oceans, not to mention the damage it caused to the stability of the environment. Thus, ASEAN is demanded to be equipped by comprehensive regulations that can solve this problem.

In the political-security domain, the long history of crime of war, genocide and massacre in the ASEAN region gives ASEAN challenge to prevent this to take place in the future. This is extremely crucial to the continuity of role of every member countries of ASEAN in maintaining peace and stability within the region.

The activity began on September 7, 2019, where several international participants arrived in Jakarta. The committee moved to pick up earlier on that date until September 8, 2019 and was escorted to the inn. Followed by the pickup of all remaining international participants, on September 9, 2019. This event was attended by delegates from almost all ASEAN State Members except Myanmar and Lao People’s Democratic Republic, and delegates from India. 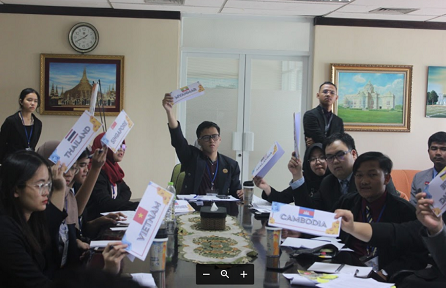 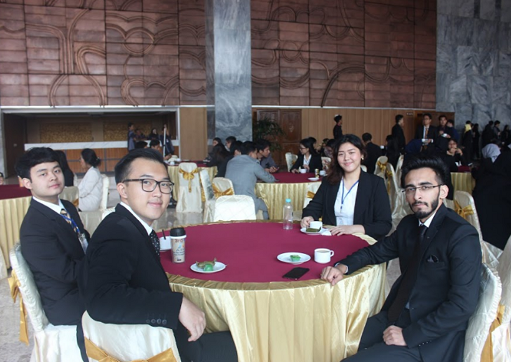 The first topic was presented by Mrs. Putri Maharani’s as a representative of AIPA and explained about AIPA and its role in ASEAN. Mrs. Putri explained that ASEAN Inter-Parliamentary Assembly (AIPA) is the new name of the ASEAN Inter-Parliamentary Organization (AIPO). AIPO was formed in 1977 and following the declaration of the formation of ASEAN in the past 10 years with the aim of uniting parliament or legislative bodies of ASEAN member states. AIPA has produced many resolutions on general issues in ASEAN. This resolution then passes through the parliament or legislative body of each member country which is socialized and recommended to the government and relevant parties to implement the resolution. 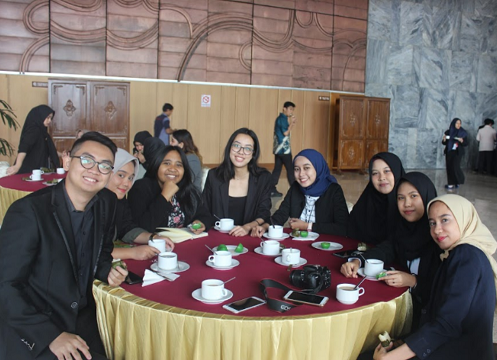 AIPO change their name become AIPA has a purpose to become more effective and integrated institution, especially in an effort to facilitate the achievement of the ASEAN 2020 vision that leads to the formation of the ASEAN Community, Organizational structure: the secretary general as the head of the representatives of AIPA. AIPA has 4 committees; political, economic, social, WAIPA (Women AIPA) and committee organization. The trial from AIPA itself will later produce a draft resolution that will be brought to the general assembly. AIPA has two AD-hoc session committees namely Aifocom and AIPA Caucus Meeting. The Aifocom committee will produce a report which later becomes a draft resolution. The last Aifocom committee was held in the Philippines and the next session will be held in Singapore. AIPA caucus committee is a mechanism to monitor if the status was implemented. The last caucus is in Laos in July, the next one will be in Malaysia. Then ithe first session was ended with a Q & A session on the topic covered. 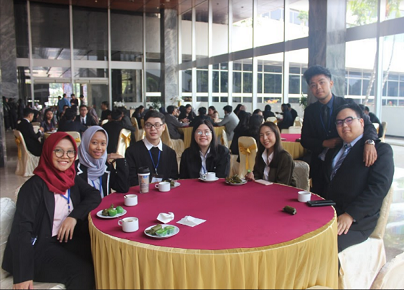 Then the seminar continued with the AIPA “guide to Model” by Mr. Sandi Nursahamdani as the representative of AIPA which started with an explanation about AIPA and an explanation of how the AIPA Model simulation will be implemented, because this year’s AIPA model is different from the previous year, this year’s AIPA model consists of 10 ASEAN countries which is each country has representatives for each chambers (Social, Political and Economic) and will be held in 3 days, where participants will be divided into 3 different chambers, Economic Matters, Political Matters and Social matters with the purpose to get a solution from every economic, social and political aspect. Then there is an explanation of the draft resolution they must make to be collected tomorrow. As well as sponsored country and opponent country. Then it ends with a responsible session on the topic discussed. 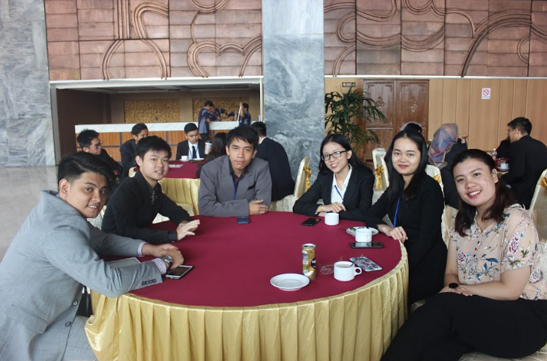 Then the event continued with a seminar themed “Principle of Non-Indifference to Prevent Atrocities in ASEAN: an Option or a Violation to State Sovereignty” by Mr. H.E. DR Hilton Fisher as the Ambassador of South Africa to Indonesia along with Mrs. Hanika Winahayu as representative of Project Management of ASEAN Institute for Peace and Reconciliation (AIPR),  and moderated by Mr. Lili Yulyadi Bin Arnakim as a Lecture of International Relations Studies of BINUS University.After that the event continued with a seminar with  theme “E-commerce and ASEAN Integration: Regulating the Cross Border Taxes?” Mrs. DR Suryani S.F. Motik as the Vice Chair of good Corporate Governance and CSR, Indonesian Chamber of Commerce and Industry (KADIN) along with  Mr. Arnaldo Purba from the Directorate General of Tax, Ministry of Finance, and moderated by Mr. Thomas Bosco Pandapotan as the Head of International Relations Student Association (HIMHI) of Bina Nusantara University. 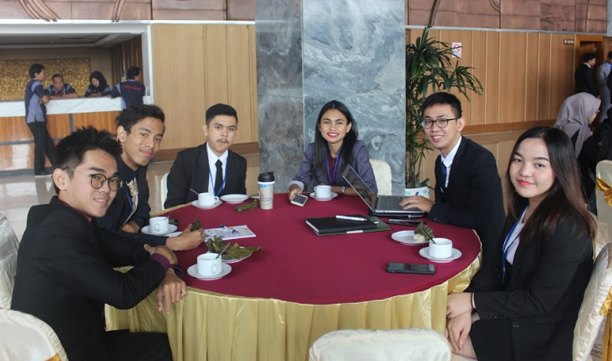 After the seminars, the activities continued with the distribution of participants according to the chambers who have previously been informed for the collection of draft resolutions and the division between sponsored country and opponent country, then proceed with a revision session of the resolution draft by recourses person in each chamber which will be used for simulation sessions. The next session is submitting the revised draft resolution to the opponent country representative for study. 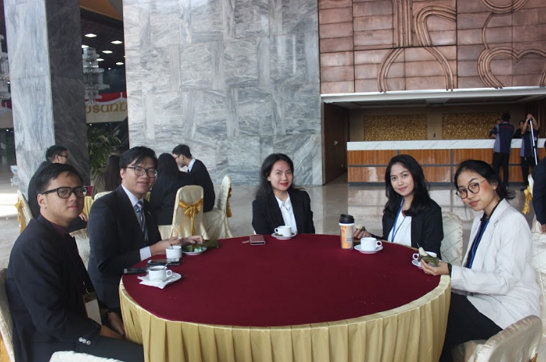 On the third day begins withIn the morning, the opening of the AIPA Model began with the screening of the AIPA anthem and was attended by all participants of the session to sing, followed by an opening speech by Mr. Jason Ferdinand as the President of AIPA Model and speaker of the national assembly of Malaysia. The beginning of the trial simulation contained the Early Plenary which contained the AIPA nomination of the Vice-President of the 3rd  Model, explanation of the program activities and the agenda of the AIPA 3rd  Model accompanied by the General Statement of the 10 ASEAN countries namely Brunei Darussalam, Cambodia, Indonesia, Lao PDR, Malaysia, Myanmar, Philippines, Singapore, Thailand, Vietnam. Then proceed with the committee meetings, on this agenda, participants in each country are divided into 3 different chambers (Political Chamber, Social Chamber, and Economic chamber).

After that proceeding with the meeting of committee on joint communique led by the president of 3rd AIPA Model and attended by the Head of Delegations of each countries. Afterward the Second Plenary Session next agenda, in this session begins with the presentation of the results of each committee by chairperson, then the signing of joint communique by the leader of the AIPA member delegations, followed by Acceptance Speech by Head of Delegations Malaysia as the host of the 3rd AIPA Model. 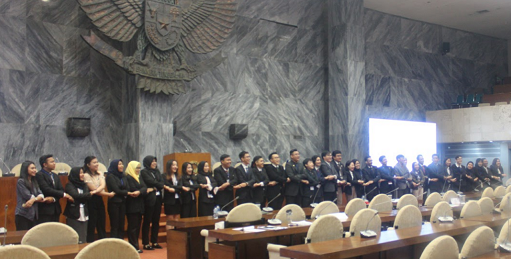 The delegates then left the Indonesian House of Representatives and prepared to head to the Century Park Hotel where a Solidarity Dinner will be held. The Solidarity Dinner began with the closing remarks from the Head of Committee, Mr. Fauzan Hadiantyo and was followed by the closing remarks delivered by Representative from AIPA, namely Hon. Mr. Isra Sunthornvut. The program continued with the traditional dance performers, performances from the Committee and also performances from the delegates. The event closed with the announcement of awards and photo session.