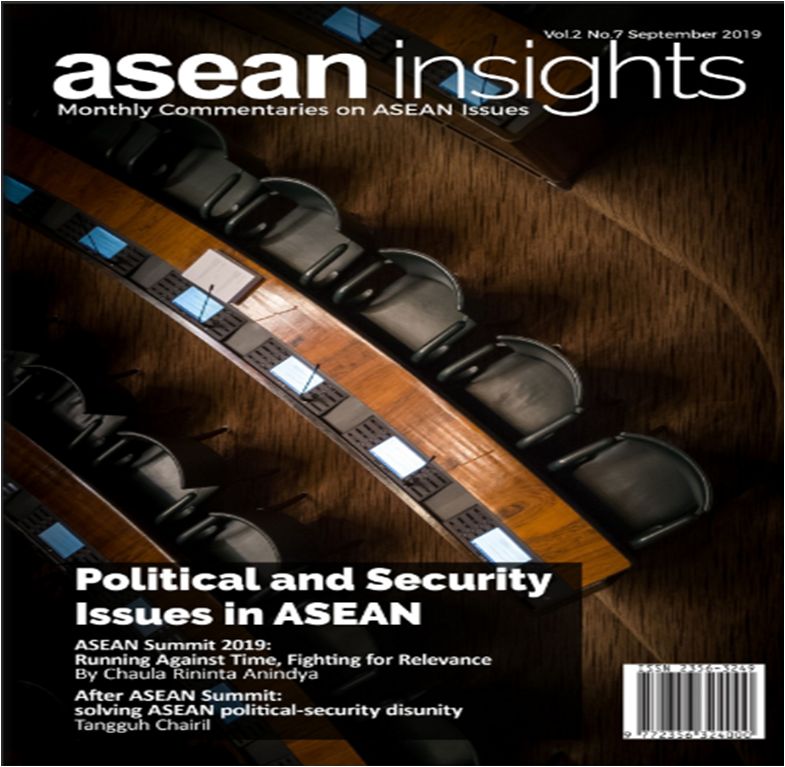 To give credit where it’s due, the 34th ASEAN Summit in Bangkok, 20-23 June 2019, brought many achievements in political and security issues. The Summit adopted the ASEAN Outlook on the Indo-Pacific and welcomed the first reading of the Single Draft Code of Conduct in the South China Sea (CoC) Negotiating Text, among others. In terms of non-traditional security, the Summit adopted the Bangkok Declaration on Combating Marine Debris in the ASEAN region.

Nevertheless, those achievements are not without criticisms. The ASEAN Outlook on the Indo-Pacific is a watered-down document adopted after searching for consensus among differing views on the Indo-Pacific among ASEAN countries. The Outlook neither creates new mechanisms nor replaces existing ones, leaving one to wonder how it will supposedly turn rivalry in the region into dialogue and cooperation, particularly with many unsolved territorial disputes.

Speaking of disputes, it is not yet known when exactly the CoC will manifest to govern state behaviors in the South China Sea disputes. The long-overdue CoC also will neither be a dispute settlement mechanism nor arrange the details of marine resource management. The CoC merely aims to manage the tension among states involved in the disputes and affirm the rules-based order. Will China, who continuously disregards international law in the region, adhere to the CoC?

The political-security disunity is what has been obstructing ASEAN from reaching consensus on many big political issues. Take, for example, the Rohingya crisis. The Chairman’s Statement of the 34th ASEAN Summit ignores the one-sided violence and does not mention the persecuted group by name, instead referring to them as “communities.” It is hard to reach a consensus on this crisis when only a few ASEAN countries are truly concerned due to domestic politics.

It is not a novelty to criticize the ASEAN consensus for its lack of effectiveness and efficiency. At the 30th ASEAN Summit in Manila two years ago, ASEAN was under fire because China’s lobbying of the Philippines – host of the summit – led to delayed statement, which took a softer stance to China’s expansionism in the South China Sea disputes. The problem has long been identified; the question now is what can be the solution.

I argue that ASEAN Minus X should be extended to include more high-political-security issues related to sovereignty and human rights. ASEAN should not wait for consensus when the sovereignty of its members is at stake, nor when there are mass atrocity crimes and human rights violations of the population of its members. To enhance its ability to respond to those security challenges, ASEAN should invoke the ASEAN Minus X when some members have disagreements.

Some of the cases in point are the South China Sea disputes and the Rohingya crisis. As discussed above, the 30th ASEAN Summit avoided mentioning China’s land reclamation projects and militarization efforts in the South China Sea due to China’s lobbying of the Philippines. Meanwhile, Cambodia and Laos have supported China in the disputes, blocking ASEAN’s unified action. However, for parties in the disputes, it is a matter of territorial sovereignty recognized by international law; it is not up for debate.

On the other hand, the Rohingya crisis has led to an estimate of up to 10,000 deaths, 128,000 internally displaced persons, and almost one million refugees. ASEAN countries have the responsibility to protect the populations at risk in a timely and decisive response. However, they cannot do that while Myanmar denies evidence of atrocities and blocks independent investigators’ access to Rakhine State. Should ASEAN fail to respond, more Rohingya blood will be on their hands.

ASEAN consensus remains an important decision-making principle in an interstate organization comprised of countries with various social and political diversities. However, criticisms of the latest ASEAN Summit point out evidence that solving ASEAN political-security disunity is still a herculean task. Therefore, it needs to be adjusted to cope with security challenges lingering in the region, most importantly related to territorial sovereignty and human rights.