Has the coronavirus pandemic worsen the relationship between countries? 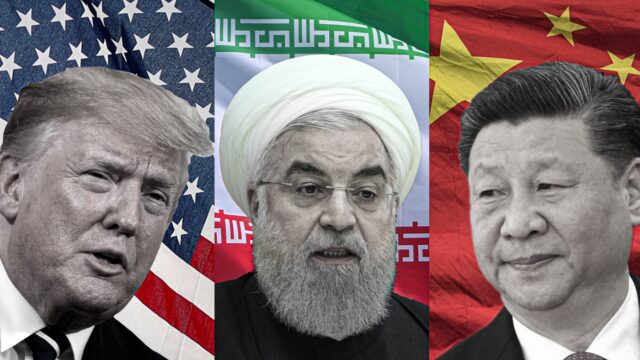 Nearly 2.5 million people worldwide have infected by the new coronavirus listed today. People have been worrying much about when will this COVID-19 pandemic ended. The impact of this unprecedented pandemic is not only shaking the global economy but also the geopolitical constellation around the world. Experts have been saying that the world order will not be changed after this pandemic. Others also projected that the competition among global major powers remained the same.

Prof. Amitav Acharya, a world top foreign policy expert from American University in Washington DC argued several interesting points in the article titled “How Coronavirus May Reshape the World Order?” published by the National Interest on 18 April. He argued that the pandemic is going to undercut support for globalization and for the US, it might be strengthening Trump’s “America First” agenda but it will also seriously diminishes America’s credibility globally and that of the Trump administration within America.

He added that the loss of America’s both hard and soft power will accentuate the transition to a post-American order, or what he had called the “Multiplex World”. In regards to China, he stated the crisis will assess which economic models either US or China who comes out better, the one who is more survive or stronger at the end will gain more credibility. And however, when Beijing seeks to repair the damage by providing aid and advice to many nations to help them cope with their own outbreaks, the international image is not going to be rehabilitated until China accepts its own share of responsibility for the outbreak.

The last argument of Prof. Acharya needs to be further discussed. I am saying this because as I saw many countries at the moment prioritizing the aid to help them fight against the disease instead of the geopolitical race between the US and China. I am not sure what “international image” was Prof. Acharya referring to, yet as I know it’s only US and UK (top officials) who have been questioning publicly the responsibility of China for this pandemic.

Prof. Joseph S. Nye Jr, a top-notch IR expert, and professor at Harvard University also stated that now the COVID-19 crisis has made the relationship specifically to US and China worse, and that represents a colossal failure of top leadership in both countries. He triggered our intellectual thinking by asking “ can we manage a “cooperative rivalry” during this pandemic?. Similar to him, Dr. Dino Patti Djalal, the former Indonesian Ambassador to the US and former Indonesian Vice Foreign Minister stated in his article at Jakarta Post, that cooperation amidst this COVID-19 pandemic has also been hampered by strategic rivalry, particularly between the United States and China, meaning suspicion and zero-sum thinking continue to guide policy perspectives.

So, I am coming back to the big question of this article, has the coronavirus pandemic worsen the relationship between countries?

As you already know, what we see today is that China now embroiled in a growing dispute with the U.S. after President Trump and his administration has actively used the term “Chinese virus” or “Wuhan Virus” a term that experts have argued only increases the sentiment of xenophobia not only in the United States but in the world. Additionally, we can see that there have been Chinese officials who have accused the US as being responsible for the virus, accused the US army.

“It could have been stopped in China before it started and it wasn’t, and the whole world is suffering because of it,” Trump told a daily White House briefing.

“If it was a mistake, a mistake is a mistake. But if they were knowingly responsible, yeah, I mean, then surely there should be consequences,” Trump said.

The statement of Trump or US government officials then received a response from the Chinese top official, the Foreign Ministry Spokesperson, Zhao Lijian by saying:

“The head of the WHO has stated many times that there is no evidence that the new coronavirus originated in the laboratory,” spokesperson Zhao Lijian said.

“Many prominent medical experts in the world also believe that the so-called laboratory leaks have no scientific basis.”

The tension or even we can call the power-race competition between the US and China has been occurred before the pandemic, from the trade wars, the debates on the Chinese BRI initiatives and so on. It is relatively easy to conclude that the COVID-19 pandemic has even got the relationship worse than before. The “cooperative rivalry” as said by Prof. Joseph Nye is unlikely to have happened in the near foreseeable future in my opinion. We might see and assess it again after the vaccines eventually produced, we still don’t know who is going to successfully produce the first vaccine, but if it’s between China and the US, it will prove my pessimism towards that “cooperation”.

The relationship between US-Iran has an increasing friction since, in January 2020, the US drone strike killed the top commander of Iran’s revolutionary guards, Qassem Soleimani. The situation at that time even worrying people worldwide of the possibility of a war between US-Iran (or even World War III). As you know, the tensions between the two countries were getting worse since the US drop its commitment to Teheran’s 2015 nuclear deal and imposed greater sanctions on Iran. It leads to a worse effect on Iran’s economy and has hurt Iran’s integrity and dignity as the sovereign state who had agreed to be sitting on the negotiation table.

The US in March 2020 offered helps to Iran in fighting against the coronavirus pandemic. And as obviously you think, Iran’s leaders reject all of the US assistance. Iran’s Supreme Leader, Ayatollah Ali Khamenei responded by saying:

“Our number one enemy is America. It is the most wicked, sinister enemy of Iran … its leaders are terrorists … Liars and charlatans,” said Khamenei.

“Several times Americans have offered to help us to fight the pandemic. That is strange because you face shortages in America. Also, you are accused of creating this virus,” said Khamenei,

The US Foreign Minister, Mike Pompeo then also gave a response toward Khamenei’s rejection by saying:

“He works tirelessly to concoct conspiracy theories and prioritizes ideology over the Iranian people,” Pompeo said.

Just yesterday, the Iranian Foreign Minister, Javad Zarif made a clear statement on the Iran’s position towards US on this pandemic. 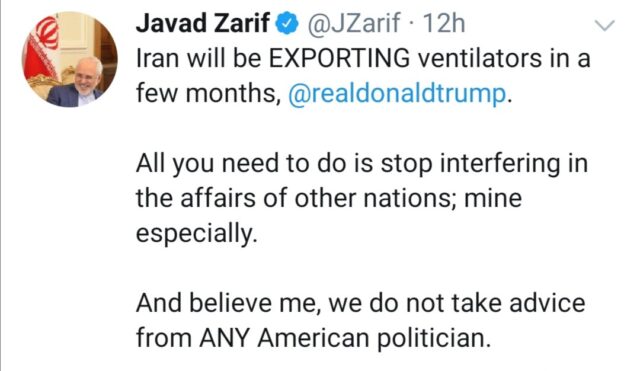 Similar to the relationship between the US and China, the tension between the two countries is becoming worse and even though there is a discussion on the US plan to lift Iran sanctions amid coronavirus, we might see it will not have happened shortly.

This part is practically not the relationship between countries, but more into with “regional institution”. But, I am justifying this is in line with the context of the discussion.

Europe was the first center of the epidemic outside China, before now the US take the position as the country with the highest number of infected cases. Italy was the worse affected country in Europe when the coronavirus start to enter the region. Now, 5 countries in Europe have more than 100,000 cases (Spain, Italy, France, Germany, and the UK). At the beginning of this infectious disease entered Italy, there was no significant assistance from the European Union, the Italian government has even accused the EU and its member states of being slow with regards to giving aid to Italy over the coronavirus epidemic.

Italy’s ambassador to the EU, Ambassador Maurizio Massari, on one occasion even complained about a lack of solidarity among member states by saying:

Brussels needed to go beyond engagement and consultations and devise emergency actions that are quick, concrete and effective.

The Italian Prime Minister, Giuseppe Conte at the time when the EU’s wide financial rescue package being discussed, saying that:

‘If Europe fails to come up with a monetary and financial policy adequate for the biggest challenge since World War Two, not only Italians but European citizens will be deeply disappointed,’ he said.

To give a better understanding on the relationship between EU and Italy, there is a poll conducted by Monitor Italia published on March 13, stated that 88% of Italians believe that the European Union is not helping Italy in their fight against coronavirus. 67% consider that belonging to the EU is a disadvantage compared to 47% in November 2018, the date of the previous survey. One more poll is telling us that China is even more friendly compared to Italy’s neighboring countries. 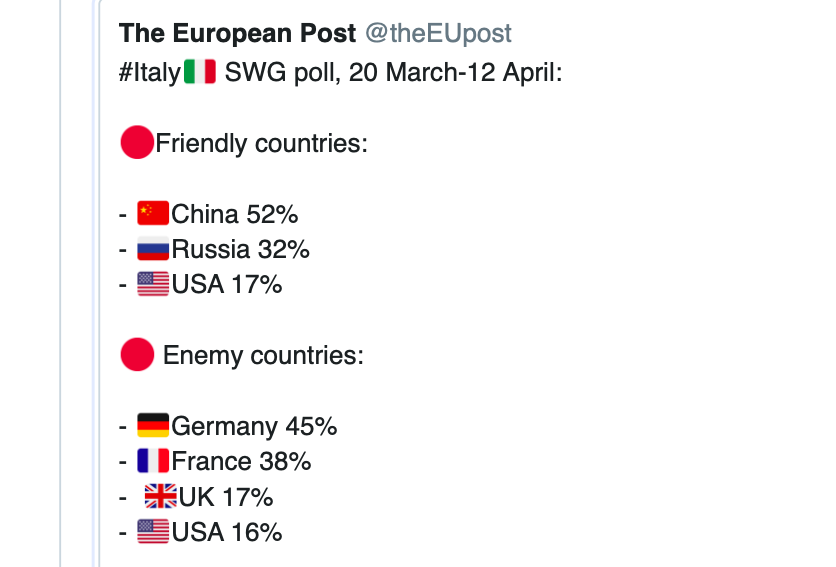 That poll is not merely a simple data, as we understand that the domestic politics is giving a significant influence towards foreign policy, the perspective of Italians could be a basis of Italy’s future foreign policy, or at least could be an altering factor towards the relationship with EU. A wider impact can be projected, which is the continuity of the regional instability, right after the Brexit issues.

However, there are also some part of the world which are claimed to be “using” the pandemic as the way to lift up their influence and improve the relationship with some other countries. Later, I am going to discuss the issue of Vietnamese “coronavirus diplomacy” which has been out lately in the foreign policy debates.

This article was retrieved from medium.com @notosuoneto. Follow Noto for more interesting insight. 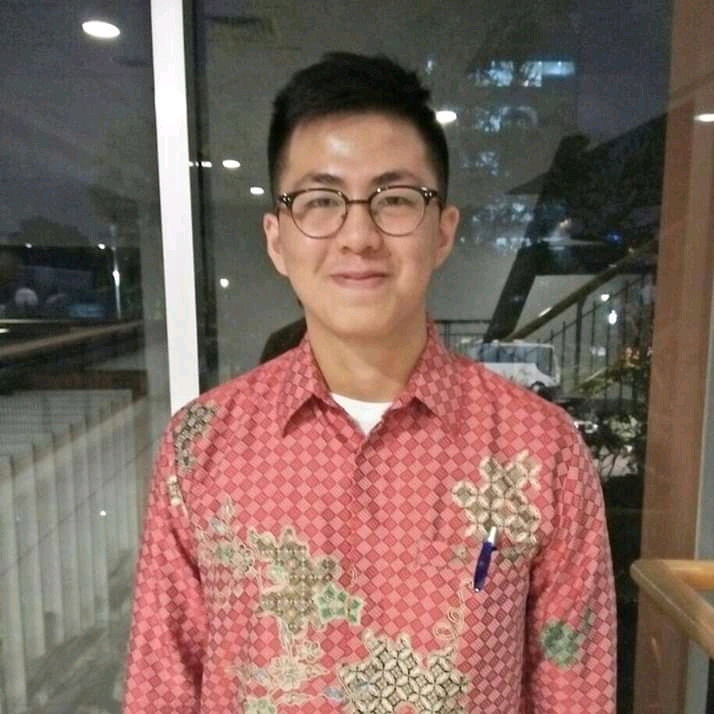