Indonesian Navy may be forgotten asset in pandemic 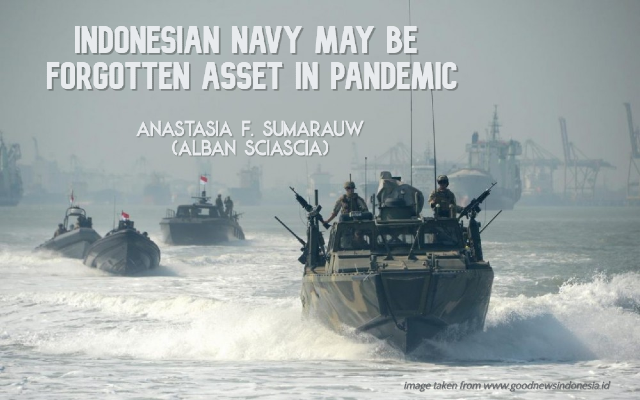 As the COVID-19 pandemic continues to worsen in different regions, exhausted and overwhelmed medical staff are fighting to provide assistance for all infected patients. According to a recent study, approximately 20 percent of COVID-19 positive cases globally require critical treatment, while the availability of intensive care unit beds is very limited.

Several governments have decided to involve their militaries to maximize state capability in dealing with the outbreak. Armies are deployed to help secure hospitals and states’ quarantine policy. The air forces distribute medical supplies, transport and evacuate patients. To some extent, a number of governments have deployed their navies’ hospital ships or multipurpose vessels to provide additional medical support.

At least five navies in the world have deployed their assets, including hospital ships, to provide additional health capability in battling COVID-19. The United Kingdom’s Royal Navy and Royal Marines Reservists have put their fleets on standby. The Royal Navy has also deployed Royal Fleet Auxiliary Argus to the Caribbean to support the British Overseas Territories in facing both the hurricane season and COVID-19 outbreak. In parallel, the Royal Netherlands Navy has deployed its landing platform dock (LPD) HNLMS Karel Doorman to support Dutch medical facilities in the Carribean.

The United States has deployed its US Naval Ship Mercy to Los Angeles and USNS Comfort to New York City to assist ground medics in treating COVID-19 patients. Spain deployed its Navy’s LPDs Galicia and Castilla to support the country’s medical capability in fighting the virus in the Spanish city of Melilla. The Galicia-class ships have multipurpose and amphibious capability as well as operating rooms and ICU beds.

French President Emmanuel Macron even launched Operation Resilience on March 26 to involve its military in fighting the pandemic. Moreover, France has deployed its famous Mistral-class amphibious assault ships (LHD) to provide assistance in the French Overseas Territories. The French Navy deployed LHD Mistral to support healthcare facilities in the Southern Indian Ocean (Reunion and Mayotte), LHD Dixmude to the French Caribbean and French Guyana, while LHD Tonnerre was sent to evacuate French COVID-19 patients from Corsica to Marseille.

In fact, the Mistral-class ship is often referred to as a “naval Swiss Army knife” for its multipurpose features and capability. More importantly, the Mistral-class LHD is designed with hospital capability meeting level 3 medical support concept of the North Atlantic Treaty Organization.

Its default design hospital infrastructure of 750 square meters include two operating rooms, x-ray and dental rooms, 19 post-operation and ICU beds and 50 medical beds. Its helicopter hangar is directly connected to the ship’s hospital and can shelter up to 16 12T-class helicopters.

Its well dock can accommodate two landing craft air cushion (LCAC) or four landing craft mechanized (LCM). This feature is vital, because the versatility of this class of LHD could be used in a large variety of operations, such as humanitarian assistance and disaster relief operations, amphibious operations, power projection or evacuation of citizens abroad.

The Indonesian government has reallocated funds within the 2020 state budget for COVID-19 medical assistance, including the Defense Ministry’s budget of Rp14 trillion (US$898.73 million) originally for defense equipment modernization. As in other countries’ contingency plans, Indonesia’s military could play a bigger role to assist medical operations, in the framework of “military operations other than war” under the 2004 Indonesian Military Law.

As medical treatment is the priority, the Health Ministry could involve the military to organize medical units, since the armed forces are trained — some if not all — with standard medical procedures and implementing quarantine policy.

Moreover, the armed forces’ capability could be maximized in COVID-19 relief missions, such as the Surya Bhaskara Jaya (SBJ) humanitarian aid. The SBJ operation involves the Navy and KRI Soeharso-990 hospital ship to treat patients within Indonesia’s territory.

Since the government has decided to set up treatment centers for COVID-19 patients in some areas including Jakarta and Galang Island in the province of Riau Islands, the roles of the Navy and the Air Force are critical. However, until now the Navy’s role in supporting the government’s COVID-19 response has been limited compared to the other services. For instance, the Navy’s C-130 Hercules and CN-295 aircraft have been involved in various government missions, such as to deliver personal protective equipment, masks and logistics to the new COVID-19 hospital on Galang. The Navy also used its aircraft to deliver personal protective equipment and masks to South Kalimantan and North Sulawesi.

In contrast, Navy’s ships have only been publicly used to pick up hydroalcoholic gel in Singapore, to evacuate crew of the World Dream cruise ship and Indonesian migrant workers from Malaysia.

As the number of COVID-19 positive patients continue to spike in Indonesia, the government could make better use of Navy ships. Unfortunately, the Navy has only one hospital ship — KRI Soeharso, and thus limited capacity to operate effectively throughout the archipelago.

Reflecting on the previous outbreak of the Severe Acute Respiratory Syndrome (SARS), inclusiveness between only the government and health professionals resulted in overlapping measures. Indonesia did not experience SARS and the Middle Eastern Respiratory Syndrome (MERS) as disastrous as the current pandemic. The last epidemics the country faced were the avian flu and swine flu with comparatively limited impact.

As positive cases have reached more than 5,000 in Indonesia, the government is urged to improve its risk management and consider the involvement in a more effective manner of its military assets. The archipelagic nature of Indonesia should lead the Defense Ministry and the Indonesian Navy to review their contingency plans and measures and to think about how to deploy versatile and effective assets to remote areas of the country.

It is also vital for the government to think several steps ahead. While the Navy is supposed to accept in service a second hospital ship in October 2021, a relevant measure should be to consider versatile ships that are not limited to countering the current outbreak but to offer to capacities to handle a large spectrum of operations.

While President Joko “Jokowi” Widodo mentioned last year that Indonesia needed at least three hospital ships, their limited capacities shows that the Navy should consider a long-term and effective solution.

This article previously published in https://www.thejakartapost.com/news/2020/04/25/indonesian-navy-may-be-forgotten-asset-pandemic.html

* Alban Sciascia is a contributor for Galatea and director of Semar Sentinel Pte Ltd, where Anastasia F. Sumarauw is a consultant.