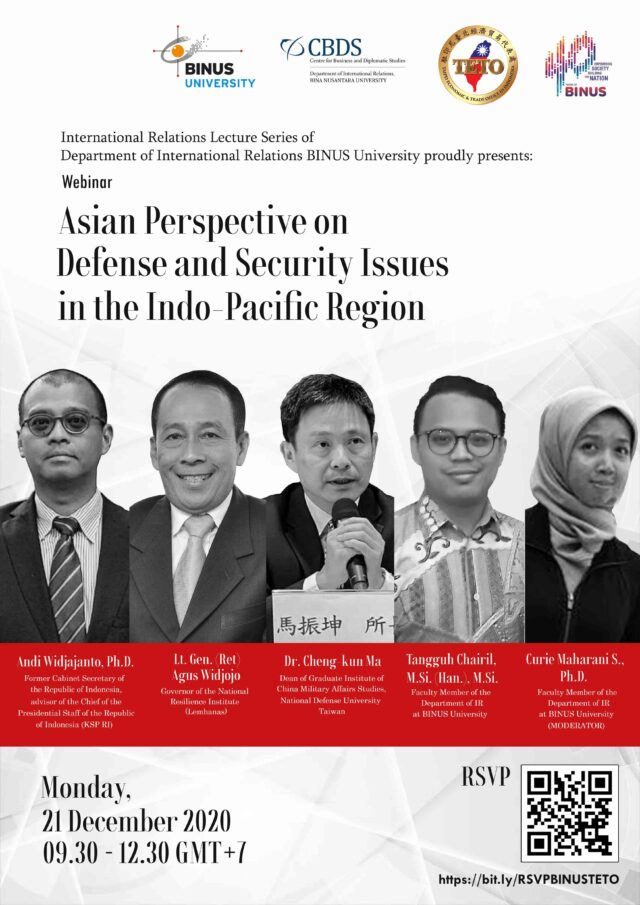 The first speaker, Dr. Widjajanto, discussed defense and security issues in the Indo-Pacific region by explaining hegemonic transition and paradigm shift in the 21st century. He began by discussing the history of balance of power from year 1 to 2012, in which there have been several power transitions between the hegemonic powers and the great power challengers. He then argued that global politics in the 21st century will be influenced by three variables: hegemony, defense posture, and global economy. If the US retains hegemonic stability, states commit to non-proliferation and disarmament, while global economy is maintained, the world will preserve long peace. On the other hand, if China’s power approaches parity with the US and hegemonic transition comes to the fore, states build provocative defense posture, while global economy is disrupted, the probability of war will increase.

Dr. Widjajanto then discussed the paradigm shift that Indonesia needs to experience to evolve into a strong state in nine variables: be revisionist balancing to the balance of power, respond to patterns of enmity in regional complex, commit to an alliance, conduct hawkish political ideology, have revisionist and innovative military organization, conduct revolution in military affairs (RMA) in military technology, allocate high defense budget for arms build-up, establish autarky defense industry, and allocate 3.5-4% share of GDP for defense budget. As of now, Indonesia has fulfilled several of the requirements, but still abandoned the others (alliance commitment, RMA, and defense budget share of GDP).

Finally, Dr. Widjajanto discussed future war in the 21st century. He argued that future war will be technology-based, with high level of destruction, and characterized by decisive battle. Future war will also be waged in complex terrain, requiring multi-domain operations, joint warfare, and hybrid war. He also argued that another variable that will influence global politics in the 21st century is energy security. If states can fulfill their energy security, the world will preserve long peace. Meanwhile, if states face resource scarcity, there is probability of energy competition and resource war.

The second speaker, Governor Widjojo, discussed Indonesia’s perspective on defense and security issues in the Indo-Pacific region. He began by discussing the geopolitical concept of Indo-Pacific as a new way of looking at world power relations. He argued that the strategic dynamics characteristic of geopolitical landscape in the Indo-Pacific consists of the structuring effect of the US-China competition, the declining multilateralism, as well as the shrinking of the geostrategic space and the spillover effects of local crises. Current events in the Indo-Pacific region include hegemonic war or supremacy between the US and China, growing military following the growing economy, as well as energy competition in the hectic sea lane.

Governor Widjojo then explained that the situation dynamics affect the Indo-Pacific region, making the region become the second arena of the strategic game after the South China Sea, as well as a single integrated geopolitical theatre. He argued that there is a power balance shift in the region, increasing security vulnerability and instability. He then argued that there are several emerging dynamics that have negative consequences in the defense environment: military environments become tougher; nuclear multi-polarity and strategic unpredictability increase; strategic competitions are more and more characterized by the existing continuity between non-kinetic violence and military conflict; while states use, or are incentivized to use, military or paramilitary means. Therefore, security and defense become the main strategic issue in the region.

Finally, Governor Widjojo discussed whether China is the only factor to concern over security of the region. He argued that China becomes the most concerning factor because of the effect of China’s military rise, its view on the Indo-Pacific, its reaction to the situation dynamics in the region, as well as the US’s reaction to China’s rise. Responding to the trend of issues, Asian states have implemented several policy adaptations and changes. Asian states are engaging in balancing acts: striving to weigh between interests and values; guns and butter; as well as economic gain and national security.

Finally, Dr. Ma explained the measures of China’s military expansion in the South China Sea, including the militarization of artificial islands in the South China Sea; the use of tactically defensive for strategically offensive purpose; as well as the use of military-coast guard-maritime militia united defense mechanism. He discussed how Taiwan and states in the South China Sea should conduct military or coast guard coordination to respond to China’s military expansion. He proposed three forms of coordination: separated but coordinated maritime exercise, separated but coordinated coast guard patrol, as well as real time intelligence exchange in contingency.

The final speaker, Mr. Chairil, discussed contemporary challenges and state responses to the geopolitics of the Indo-Pacific region. He began by discussing the geopolitics of the region, including the great power politics between the declining US and the rising China; territorial disputes in East Asia, Southeast Asia, and South Asia; as well as non-traditional threats in the forms of hybrid conflicts, terrorism, and cyber-attacks. He then explained the military balance in the region, in terms of military expenditure, weapon system, and arms transfers.

Mr. Chairil then explained several contemporary challenges in the Indo-Pacific region, focusing on China’s military expansion in the East China Sea and the South China Sea, as well as China’s A2/AD capabilities to prevent the US military intervention. He also discussed China’s use of coast guard patrols to enforce its claims in the South China Sea, despite the claims have been dismissed by the 2016 arbitral ruling by the Permanent Court of Arbitration (PCA). He then discussed state responses to China’s claims in the South China Sea, in which most states agree that China’s claim to historic rights is illegal.

After all speakers’ presentations, the moderator guided the question and answer (Q&A) session. After 45 minutes of Q&A session, the webinar proceeded to closing and photo session. 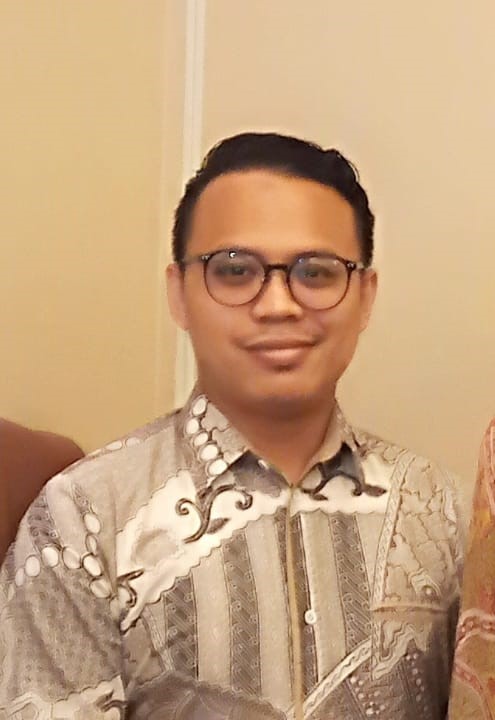