FPCI University of Padjadjaran Model United Nations is a UN simulation that is devised by FPCI charter of Universitas Padjadjaran on 19th-21st November 2020. The simulation is held at an online platform due to the Covid-19 pandemic; if there’s none, the committee as I have asked them personally argue that they’ll organize it in Bandung.

The simulation itself also provides an opportunity for participants to attend the panel of experts’ session. Representative from the Ministry of Foreign Affairs, Mr. Roslianyah Soemirat, offers his presentation in regards of the situation and condition at Golan Height itself. Other than that, other experts also provided a brief explanation and presentation in accordance to their specialized field work and the council itself. 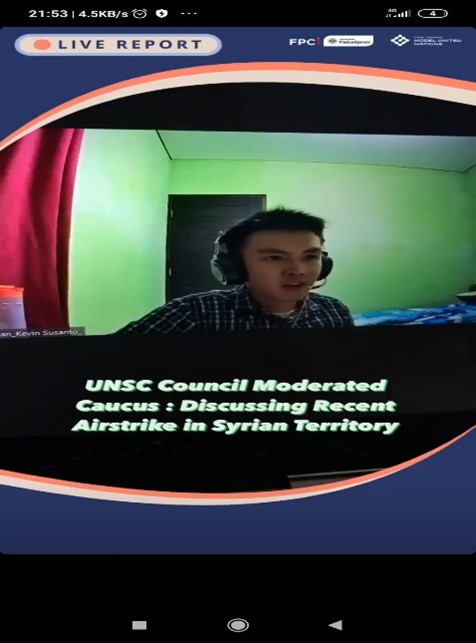 I, Kevin Susanto, as the sole representative of BINUS University attend the Security Council at which it discusses about the Golan Height and their possibility of new war; or in the other word, the council itself is a hybrid of real-life events and fictional case study. The council for 2 days shall be considered as one of the toughest in terms of substantive matters due to their accentuation of legal basis and comprehension of both the situation around the Levants & international law, at which it requires participant to insert their effort to understand and research about customary international law until international humanitarian law. Besides, I’m being enrolled to represent the Islamic Republic of Iran at the council as I attend the event itself.

Since this is the security council and mostly it also being stereotyped as the council where most Draft Resolutions won’t pass, I do experience that despite I’ve consolidated with 80% of participant at which only two states (Israel and China PR as the sponsor; since there’s no USA inside the council, then it’s being substituted by a shadow delegate at the middle of the committee session) oppose my draft resolution compared to mine which consist of six participants.

At the awarding session, it’s being announced that I as the delegate of Iran receive the best delegate award due to the only participant provide the most realistic solution and tangible mechanism for the dispute settlement alongside with the emphasis of legal basis. Unfortunately, there’s no picture of myself due at awarding session due to my own recklessness to display an unprofessional act. This happen that especially I was put my camera off and went to the restroom before I returned to know that I’ve been listed as the best delegate which shocked and put me to wonderment; at that time, I expect that at least Honorable Mention (3rd place) or Most Outstanding (2nd place) is the highest award  that I’m cable to attain. 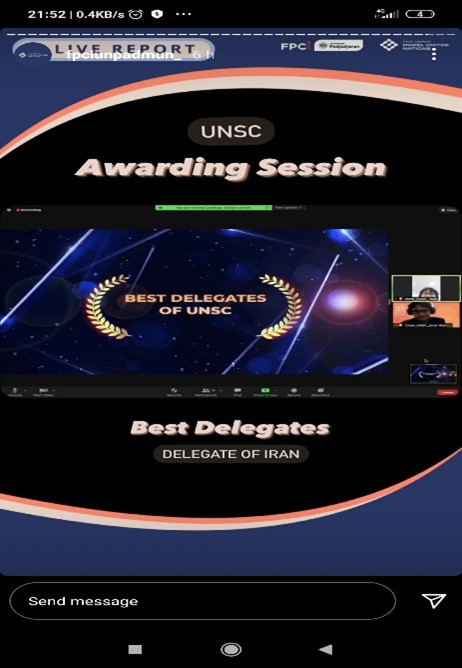 From the event itself, I learn plenty of things which are crucial for fellow participants.

Firstly, display your composure as composed as professionals albeit the end-result will tremble your initial hypothesis & calculation. Secondly, it’s important for participants and future diplomats to select a diction and vocabulary to sound professionals and that you are displaying yourself being relevant. At the council, I admit that I lack my vocabulary at which it causes my speech looks inferior at some juncture which lead to a shaky performance. Thirdly, never let your stance to sway. Swaying your stance means your opportunity to snatch an award at Mun will automatically be disqualified. Thirdly, bear in mind that your body language and parlance likely also influence the first impression of others during a speech. Lastly, never be late on submitting your assignment or position paper; I’m being nominated by the chairs to have the best pospap[1] but not winning the award as I’m late for more than an hour of the deadline.