VESTMUN Model United Nations is a UN simulation that is devised by Universitas Pembangunan Nasional “Veteran” Jawa Timur 14-15 November 2020. Due to the Covid 19 pandemic, the simulation was held at an online platform although usually the event was held in Surabaya.

There are 108 delegates registered for VESTMUN 2020 regardless of the inconvenience circumstance of the pandemic itself, with the grand theme of “Combating Global Instability”, this year VESTMUN divided into four councils. All of the four council has its own theme which resonate with the grand theme; ITU (International Telecommunication Union) with the sub-theme “Preventing Misuse of Social Media that Turns to Cybercrime” ; UN WOMEN (United Nations Entity for Gender Equality and the Empowerment of Women) with the sub-theme “Implementing a Post-Pandemic Global Economy Strategy for the Empowerment of Women” ; UNICEF (United Nations International Children’s Emergency Fund) with the sub-theme “Addressing Educational Gaps and Technology Disparities” ; IFAD (International Fund for Agricultural Development) with the sub-theme “Improving Poor Countries by Assisting Agricultural Development. 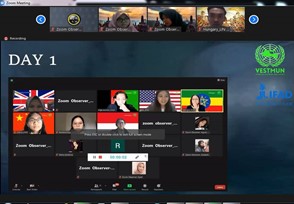 I, Layla Rahima Kamka, as the sole representative of BINUS University attended the IFAD (International Fund for Agricultural Development) with the sub-theme “Improving Poor Countries by Assisting Agricultural Development” which discusses agricultural development with the investment process. The council for two days shall be considered as one of the toughest in terms of substantive matters due to each country’s stances and overall understanding on controlling economic development through international politics, which requires participants to stand on their stances and also comprehend completely that there is a gap in developed and developing countries. 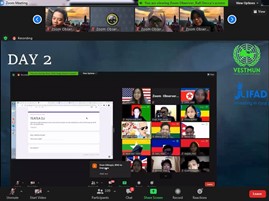 I got the opportunity to represent the  Federal Democratic Republic of Ethiopia, due to the various reasons of misleading stances of some of the countries, the council needed to give three crises even though IFAD is a low-politic council. The crises weigh down the flow of the council and at the same time help countries that choosed irrelevant stances to go back to their track. In the middle of the council we had three blocs yet eventually merged to two blocs and the “stabback diplomacy” also occurred which I failed to handle with a cool head, with the right stances my bloc passed the Draft Resolution as we dominated the council.

At the end of the council, the Chairs gave us an opportunity to have an appreciation of the council such as the most ambitious, the scariest one, the most diplomatic, the most capitalist, the sassiest, the clueless one, and the delegate who most likely to started WW3, which i got the sassiest one for fun. 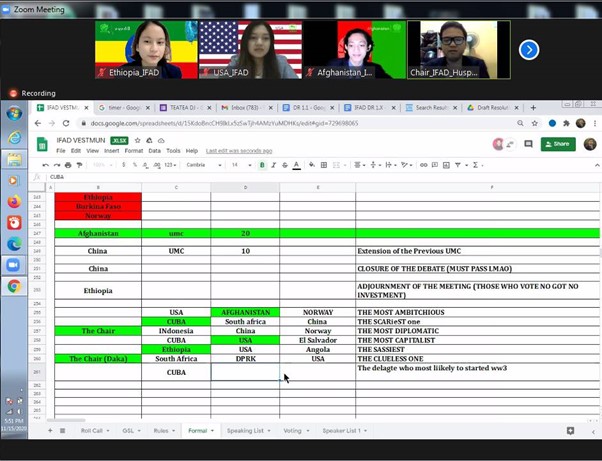 The VESTMUN 2020 gave me plenty of extended knowledge not only on the sub-theme and the council IFAD itself but also intriguing information from fellow delegates and the chairs.

Firstly, as the most crucial one for me personally that the “backstabbed diplomacy” is real and indeed happens in real life, in International Study itself i learned that diplomats will make decisions for the most beneficial ones no matter what, therefore a realization not to take it personally. Secondly, it is important to make an agenda of what issue to bring and preparation of the main motion to rise is helpful in order to make a concise and structurized debate.