Is China Winning in the South China Sea? 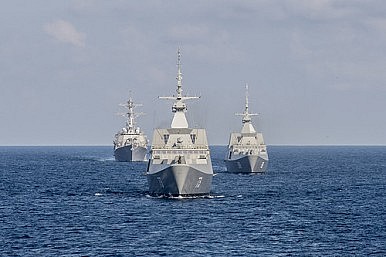 One of the Faculty Members of the Department of International Relations at Bina Nusantara University, Sukmawani Bela Pertiwi, published an article titled “Is China Winning in the South China Sea?”. The article is as follows.

Is China Winning in the South China Sea?

After the Philippines, the United States has also softened its approach to China while the rest remains silent.

Take the South China Sea dispute, for example. Among the Southeast Asian claimant states, Vietnam and the Philippines have been the most outspoken countries against China in the dispute. The Philippines even took the bold step of challenging China by raising the issue to the Permanent Court of Arbitration, which is against China’s preferred bilateral approach. However, under the new administration of President Rodrigo Duterte, the Philippines is separating itself from the PCA rulings of last summer. Instead, Manila has declared its interest in more direct talks with China, in whom Duterte found a potential partner for his economic and security policies.

Vietnam follows a similar path. After the prime ministers of Vietnam and China met in October last year, the communist leaders from both countries met early this year to strengthen their bilateral ties, including by working to settle their maritime dispute peacefully.

The policies of other claimant states are more amenable to China. Malaysia and Brunei Darussalam have consistently pursued a peaceful approach toward China. Even though Malaysia stepped up its defense in 2013 after China for the first time sailed as close as 100 km away from Malaysia, their attitude afterward demonstrated a return to their initial policy of keeping a low profile in the disputes. In November last year, Malaysia’s prime minister visited Beijing within two weeks after Duterte’s trip, to strengthen bilateral defense cooperation including in the South China Sea.

Given the shifting attitudes of the claimant states, it is then no surprise if non-claimant states in ASEAN have showed a similarly soft, if not even milder, approach toward China. Cambodia and Laos in particular have been widely perceived as China’s supporters within ASEAN as both countries were reluctant to mention in detail the South China Sea disputes in the joint communiques of ASEAN meetings during their respective presidencies.

And even though other ASEAN countries are not siding with China, their policy on the South China Sea also begin to soften. The recent statement from the ASEAN Summit in Manila, for example, highlighted the improving relations between ASEAN and China and how they were looking forward to the completion of a Code of Conduct in the disputer region. The statement, meanwhile, made no mention of China’s continuous island-building in the South China Sea.

The last and perhaps most significant departure from the trend in the past five years is the United States itself. During the Obama administration, the United States enhanced its military presence in the region and strengthened support for regional claimant states, often times by conducting joint naval exercise and criticizing China for threatening freedom of navigation. Under Donald Trump, however, the United States has adopted a more careful approach toward China. The recent government rejection of Freedom of Navigation Operations in the disputed area was seen as appeasement in exchange for China’s cooperation in handling the nuclear crisis in the North Korea.

So does this mean that China is winning in the South China Sea? Not necessarily.

If one looks at theories on territorial disputes, what is happening in the South China Sea is more akin to temporary stability, achieved when countries deliberately play down the issue to divert their attention to other more urgent issues. However, the fact that the disputes are linked to actors’ immediate national interests means that the dispute might quickly become unstable once the current priority changes.

In the case of the South China Sea, the dispute is more complex as the world has a stake in the freedom of navigation in the disputed sea to preserve vital maritime trade. Having said that, it’s too soon to conclude that the recent developments mean China is winning in the South China Sea.